While the rest of the KHL grabs a well-earned rest in the gap between completing their new rosters and starting their preseason training tours, the League’s newest teams are still buzzing with activity. For the employees of Lev, Slovan and Donbass, rest days are few and far between as they try to meet all the strict criteria needed for their club to become a part of the KHL. We will take a look at each of the debutant teams in turn, and we begin our journey in Prague, home of a club with the familiar name of Lev.

Yes, a club of that name played in the previous KHL season, but Lev of Poprad, Slovakia, is no more, and the club from the Czech capital is an entirely new entity with new owners. We must hope that this young “Lion” has a longer and happier life than the old one.

The club can already boast one successful coup, having taken on board Normunds Sejejs, formerly general manager at Dinamo Riga, and a man who possesses an unrivalled knowledge of the workings of the KHL and the rules of the game. Furthermore, Sejejs in his playing days appeared for four different Czech teams, speaks the language fluently, and has even played at the arena, the home of the famous Sparta Prague, where Lev plans to host its first official game as a KHL club. This will be on the 6th of September, when the visitors to the Czech capital will be none other than Sejejs’s former employers – Dinamo Riga.

As many hockey fans will know, Sparta’s Tipsport Arena is not the only stadium in the city, and nor is it the best. The O2 Arena, where Sparta’s crosstown rivals Slavia ply their trade, is an impressive new venue but Lev was put off by the high rent demanded by the owners. This leaves them with the problem of bringing the Tipsport Arena up to scratch. Not an easy problem to tackle, since the stadium dates from the 1960s and has the status of a historical architectural monument to that era, so a complete rebuild is also out of the question. Still, at least visiting fans from Minsk, Ufa, Petersburg and other cities which boast the most modern and palatial arenas will get a taste of what being a hockey fan was like in their fathers’ time.

“That is our main task, to meet all the technical demands of the League,” said Normunds Sejejs. “The KHL has supplied us with the list of what is to be done in time for the season, and I’m confident we’ll manage.”

The list is a long one, and includes installing new lighting, constructing special platforms for TV cameras, and making sure that all the journalists have an individual spot complete with Internet access. But progress is being made: a brand new media cube is already up, new boards will soon follow, and decorators are giving a new look to the entire foyer area.

No less daunting is the task of capturing the imagination of the Prague public. This city certainly does not suffer from a lack of things to do and places to go in the evenings; moreover, it will be hard to entice existing hockey fans into switching their allegiance from Slavia or Sparta, both of which have built up their following over decades.

Normunds has promised to leave no stone unturned in the club’s search for supporters. Every modern marketing technique will be used, and every effort made to ensure Lev’s games are an attractive prospect for locals and visitors to the city. Tickets will be in the region of €10 and the club plans to give some away free to students and schoolchildren. One positive about the Tipsport Arena is that it is a known landmark, although new and more constructive talks are planned with the owners of the O2 Arena about moving there later in the season, during the knockout stage. 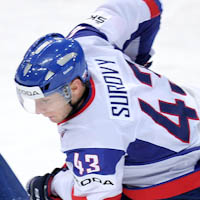 To do that, of course, Lev must first qualify for the play-offs. And the club has set its sights firmly on doing exactly that. The recruitment guys have been far from lazy, and have already landed the likes of Lubos Bartecko, Petr Vrana, Tomas Surovy (right), Jaroslav Svoboda, Marcel Hossa, Michal Sersen, Ondrej Nemec and the man who last season scored the goal which won the Gagarin Cup, Jakub Klepis. And there are more on the way.

“We plan to sign a big-name player in time for the opening of our training camp,” says Sejejs. “We’ve been looking further than just among the NHL free agents, but we have enough money put aside in the budget for a top-level player.”

One figure who fits the bill would be star forward Petr Nedved, who would like to play out his career back in his homeland and would seem an ideal figurehead for Lev, both sport-wise and image-wise. He also fancies a crack at the KHL, but according to the forward, he and the club have not yet managed to reach any agreement.

Lev’s budget is around €19-20m, a decent sum for a Prague hockey club, although lower than that of most Russian-based clubs. Normunds Sejejs is, of course, perfectly correct when he says a hockey game is contested by players, not money, so the funds should be more than enough for the debut club to hold its own out on the ice and to modernize the facilities around it. Lev also has plans to build its own arena, so no-one can accuse the KHL new boys of lacking ambition.

Now hockey fans have yet another venue where they can see the strongest teams of the Old World do battle when the fifth Kontinental Hockey League Championship begins in September. And Prague is one of those cities to which few would refuse an invitation. Beautiful architecture, hospitable people, waves of wonderful beer and now superb hockey – who could ask for anything more?