On the 26th of May the Arena Traktor in Chelyabinsk hosted the Kontinental Hockey League Entry Draft. It was the fourth draft in the KHL’s short history, but it will be remembered as one of the most glittering events the League has staged. Around three thousand fans were in the stands to watch the draw for the rights to sign the most talented young hockey players, while the ceremony itself passed without a hitch, thanks to the meticulous organization of which the KHL is justifiably proud.

Players are only eligible to participate in the KHL Junior Draft 2012 if they belong to one of the two following categories:
1) graduates of hockey schools in Russia who are aged 17. Age is determined by calendar year, and not by day and month of birth.
2) hockey players aged 17-21, playing in competitions staged within the borders of the Russian Federation, and not currently contractually tied to any of the clubs in the KHL, VHL (lower league) or MHL (junior league), the rights to whom are not held by any clubs in the League’s structure.

Before the ceremony got underway the KHL Hockey Operations Vice-President Vladimir Shalaev conducted a draw for the right to choose first. The clubs taking part were the three which had occupied the lowest places in the 2011/2012 KHL Championship - Vityaz, Avtomobilist and Sibir, plus Lokomotiv, as part of the League’s plans to restore the club to its former glory.

First pick went to Sibir, followed by Lokomotiv, Vityaz and Avtomobilist. As it later became clear, before the start of the Draft there were negotiations between representatives of Sibir and SKA, as a result of which the Novosibirsk men received the sporting rights to defenseman Johan Fransson, who played by the banks of the Neva in the 2010-11 season, giving the Petersburg club the right of first pick in return. A while earlier, in similar fashion, Vityaz had given up its position to Ak Bars, and Avtomobilist to CSKA.

“We put some thought into the trade with SKA,” said Sibir general manager Kirill Fastovsky. “For a long time we had been seeking a strong defenseman and our search brought us to Fransson, the rights to whom belong to SKA. I hope our negotiations with the player will reach a successful conclusion and he will be able to strengthen our team. After this we can say we have assembled practically all of the roster for the coming season, and that – apart from getting to the play-offs – is our only target at Sibir.”

So at the start of the ceremony the voice at the microphone belonged to SKA sporting director Andrei Tochitsky, as he read out the name of the #1 pick of the KHL Entry Draft 2012. This was Russian defenseman Denis Alexandrov (17.01.1995), a graduate of Moscow’s Krylya Sovetov hockey school, who spent last season appearing in the Moscow open Championship. 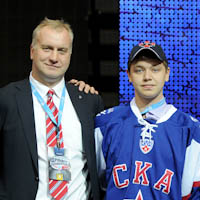 “Of course I was hoping to be chosen in the first round, but I really didn’t expect to be the first overall pick in the Draft,” said Denis (left), who can now look forward to seeing his name adorn the headlines of many a news agency. “My entire career so far has been at Krylya Sovetov and we played really well last season, but inside I’m now ready for the move to Saint Petersburg. My parents introduced me to hockey. We lived not far from the arena in Setun, in west Moscow, and my father, who traveled with me to Chelyabinsk, was the first to congratulate me. The second was my mother. I’m happy.”

The #2 Draft pick was a player from Finnish club Tappara, forward Alexander Barkov - namesake and son of the former head coach of Metallurg Magnitogorsk and one of the brightest young prospects in the game. He was picked by Lokomotiv. Barkov junior already made his mark in senior hockey on October 1, 2011 when he became the youngest player ever to score in the SM-liiga, with a goal against Ässät. At the tender age of 16 years, one month and two days.

The #3 pick, thanks to Ak Bars choosing a graduate of its own school, was forward Rinat Valiyev. 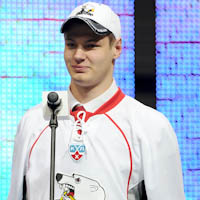 The player rated the number one Russian youngster by the KHL Scouting Bureau was Valery Nichushkin (right). The graduate of the Traktor Chelyabinsk hockey school was the 11th pick, and he was chosen by Dinamo Minsk. The host team, however, exercised its right of first choice for one of its own graduates, and so to loud cheers from the home crowd Nichushkin donned the jersey of the Chelyabinsk club, with his name already emblazoned on the back. Valery later admitted that he was not particularly saddened that the pre-draft predictions had not come true, and he was happy to stay with his home club.

The representatives from Barys Astana needed three attempts to snare a player in the first round of the Draft. Twice they chose graduates from the Avangard hockey school, and twice the Omsk men held on to their charges. As a result, the men from Kazakhstan settled for a graduate of their own school, Madiyar Ibraibekov. 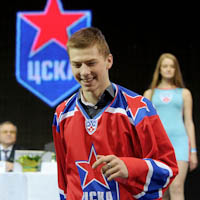 CSKA kept up its tradition of selecting the youngsters from its own school, and used its right of protection on five more of its players, although the Army Men, represented in Chelyabinsk by Sergei Fedorov, chose Vladislav Boiko (left) of Krylya Sovetov in the first round. In stark contrast to the Barkovs, Vladislav is from a family of artists. His father is a painter; his mother is a ballerina. After the ceremony, Boiko’s father said he has not ruled out the possibility of painting a picture with a hockey theme sometime in the future.

“We liked this player in yesterday’s match between the youngsters,” said Sergei Fedorov. “I’m glad that no-one managed to sign Vladislav Boiko earlier. Overall we did quite well in the Draft, where the main thing for us was to keep hold of as many graduates of the CSKA system as possible. The owners have directed the club management to create a roster which is first and foremost built around players brought up in the club’s own school.”

There was a curious episode in the second round involving Spartak. The Moscow club’s representatives named Andrei Alexeyev, but Lokomotiv had already tried to draft the forward and been thwarted when Spartak’s Moscow rival Dynamo, named Alexeyev as one of its protected players. For this mistake Dmitry Kurbatov, in charge of the ceremony, revoked Spartak’s right of selection.

As Gagarin Cup winners, Dynamo’s pick came near the end of each round, but the KHL champions’ technical director Alexei Panfilov still managed to draft Vladimir Bryukvin – a graduate of the Blue-and-Whites’ own school and ranked fourth by the KHL Scouting Bureau.

The top ranked youngster in the list of North American players was Roman Graborenko, of Cape Breton in the Quebec junior league. The young forward has Belarusian citizenship, so it was no surprise when he was snapped up by Dinamo Minsk.

The highest rated European player, placed 7th in the KHL Scouting Bureau’s rankings, was Radek Faksa, a Czech center playing for Kitchener of the Ontario Hockey League, and he was picked by Neftekhimik. The Bureau has a short description for each player, and next to Radek’s name were these words: “…his style of play is reminiscent of Jagomir Jagr.”

In all, the clubs chose166 players in five rounds of the draft