Review of the season – part 2

January
The annual All-Star roadshow heads to Riga, where a weekend festival of hockey sees Traktor’s Alexander Ryazantsev (left) prove he has the world’s hardest shot. His 183.67 km/h effort in the pre-game skills test serve as a warning to opposing netminders: in the game itself his two goals help the Eastern Conference’s Team Fedorov beat Team Ozolins of the West 15-11.

The weekend also marks the end of an era, with Vyacheslav Fetisov announcing his departure from both CSKA Moscow and the KHL directors. Fetisov, a hugely respected figure in the game on both sides of the Atlantic after a trophy laden career with the Army Men and later the Detroit Red Wings, opted to stand aside after a new management team came into CSKA. The Red-and-Blues, now under the ownership of Russian oil giant Rosneft, will hope for a return to former glories after struggling to compete at the top level in recent seasons.

Transfer deadline day on Jan. 15 sees a couple of high-profile moves: Vladimir Tarasenko, captain of Russia’s under-20 World Championship winning team a year earlier, leaves Sibir Novosibirsk for SKA St. Petersburg as Milos Riha adds to an impressive roster at the top of the Western Conference. But it’s Dynamo Moscow’s swoop for 24-year-old Vityaz Chekhov forward Mikhail Anisin which proves the more successful move at the end of the season. 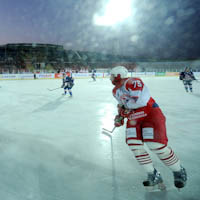 February
Hockey heads outdoors, with Finland and Russia playing an international game at Helsinki’s Olympic Stadium before a record-breaking crowd braves the Siberian winter to see Lokomotiv Yaroslavl win 3-2 at Sokol Krasnoyarsk (right). Russia’s triumph on a chilly Nordic night is witnessed by more than 25,000 fans, while the 16,100 who come to Krasnoyarsk’s Central Stadium represents a record for a Russian League game. The Loko game, dubbed the “Russian Classic” also serves as a fund raiser for the families of the victims of the Lokomotiv air disaster; the Yaroslavl team’s win helps it push on towards the play-offs.

The KHL regular season comes to an end with Traktor Chelyabinsk lifting the Kontinental Cup. The Ural side tops the table, just ahead of SKA St. Petersburg. Amur Khabarovsk reaches the play-offs for the first time in KHL history, but there is no fairy tale debut season for Lev Poprad, which finishes out of the top eight in the Western Conference. The opening round of play-off action also promises a clash of the titans in the east, where defending champion Salavat Yulaev faces Ak Bars Kazan, winner of the two previous editions of the Gagarin Cup. 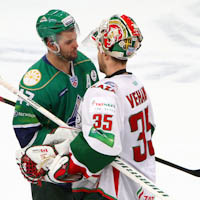 March
The play-offs get off to a spectacular start with the Conference quarter finals throwing up several intriguing clashes. The toughest tussle sees Metallurg Magnitogorsk claw back a 1-3 deficit to deny Barys Astana; Torpedo also needs seven games to see off Dinamo Riga. The much-anticipated clash between Ak Bars and Salavat Yulaev (left) goes the way of the Kazan team, winning 4-2 despite losing the opening game of the series 3-0 on home ice. Salavat’s defeat costs Team Russia the services of Alexander Radulov for the up-coming World Championship: he chooses to return to complete his contract with NHL side Nashville Predators. Both conference winners advance serenely enough: SKA beats CSKA 4-1, enjoying some big wins on home ice, while Traktor records the same series scoreline against Yugra Khanty-Mansiysk. The Chelyabinsk side produces a memorable fightback in game 3, however, hitting five unanswered goals in the third period to overturn a 2-6 deficit.

In round two SKA goes goal-crazy again – a 4-2 series win over Atlant Moscow Region sees the Petersburg team hit 22 goals. The other series are characterized by closer games: Dynamo Moscow sees off Torpedo Nizhny Novgorod in six, but every game is decided by a single goal and two go to overtime. It’s a similar story in the east, where Traktor plows up Ak Bars’ hopes of glory with a 4-2 win in a hard-fought series, while Avangard Omsk beats Metallurg in five, reeling off four straight wins after a 0-1 overtime loss in game one. 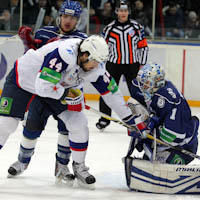 April
In the west, the Conference Final produces a major shock: free-scoring SKA not only fails to beat Dynamo, but cannot win a single game. The Moscow side, widely viewed as rank outsiders, recovers a 0-3 deficit to win Game 1 in overtime – helped by a video ref who denied SKA’s Tony Martensson the game winner less than a minute before Denis Mosalyov completes his hat-trick to give Dynamo the verdict. That sets the tone: SKA produces moments of fantastic hockey during the series, but Dynamo’s resilience and work-rate sees it home and a decisive 6-1 victory – inspired by an Anisin hat-trick – wrapped up a 4-0 sweep in style.

The Eastern final between Traktor and Avangard doesn’t have a clear favorite: Traktor’s star man, Evgeny Kuznetsov, is playing his way back into form after injury while Avangard’s Czech forward Roman Cervenka is among the leading point scorers in the play-offs. The opening game goes to a second period of overtime before young defender Nikita Pivtsakin wins it for Avangard on 86:01; the Omsk side, thus inspired, goes on to take the series in five.

That sets up an intriguingly-balanced grand final, featuring two coaches out to prove a point. Dynamo’s Oleg Znarok has been here before, losing in seven to Ak Bars in 2010; Raimo Summanen was dismissed by Avangard during its play-off campaign a year earlier, before returning to Omsk in December. A tough battle is expected, and the two teams don’t disappoint.

In the early games, Alexander Perezhogin is the hero. The Avangard forward hits five goals in four games, three of them game-winners, to put the Siberians on the brink of glory. But Dynamo digs in. Znarok refuses to panic, and in a series where goals are at a premium he sees his side open up a 3-0 lead in game five as it strives to save the series. Avangard trims it to a one-goal game, but Dynamo gets the verdict. 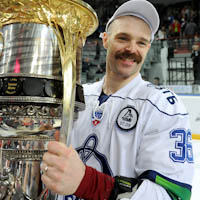 There’s a further blow for Avangard after the game when it emerges that influential defenseman Anton Belov has failed a preliminary drug test and will be suspended for the rest of the final. In his absence, Dynamo produces a scintillating attacking display on home ice, winning 5-2 and sending the action back to Omsk for a winner-takes-all showdown.

Back in Siberia, the tactics are cagey and the game is tense. Two scoreless periods show why goaltenders Kari Ramo and Alexander Yeryomenko have been the key men for much of the series.

Finally Dynamo’s Czech duet finds a chink in Avangard’s armor: Marek Kvapil, behind the red line, picks out Jakub Klepis unattended in the slot. Ramo saves the first one, but is powerless as Klepis (left) lifts the rebound often his prone pad to win the Cup by the narrowest of margins.

May
Team Russia travels to Stockholm for the World Championships, with controversy continuing to rumble over some selections. Dynamo’s Anisin, play-off top scorer and newly-minted Gagarin Cup winner, is surprisingly omitted, while Avangard’s two Alexanders, Popov and Perezhogin, are both on the plane. KHL representatives are studded throughout the rosters at the big event, which sees the national teams of fellow KHL nations Belarus, Latvia, Kazakhstan and Slovakia taking part as well. 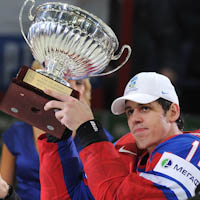 In the group stage Russia begins slowly, briefly trailing against the Latvians before winning 5-2. A dramatic 7-3 fightback win over Sweden, inspired by Evgeny Malkin (right), finally brings the tournament to life and, backed up by a miserly defense, Russia tops its group with a perfect 7-0 record. There’s further KHL interest in quarter-final opponent Norway: SKA’s Patrick Thoresen has been the star man for the Vikings, and goes on to finish the tournament with 18 points, just one behind Malkin. Thoresen’s skills are not enough to sink Russia, however, and three goals in the final stanza give the Red Machine a 5-2 win and a place in the medal games.

Here the action switches to Helsinki, and hosts Finland are ruthlessly dispatched in a 6-2 semi-final win. Malkin’s hat-trick does the damage as Russia avenges a semi-final defeat from 2011 and heads to its fourth final in five years.

The opposition this time is Slovakia, looking for only its second ever gold and inspired by the memory of former captain Pavol Demitra, who died in the Yaroslavl disaster. High on emotion, the Slovaks grab the lead after just 66 seconds, but an Alexander Syomin double proves crucial as Russia rallied and eventually cruise to another 6-2 success. Fellow NHL men Pavel Datsyuk (1+2) and Alexander Ovechkin (0+2) also chip in before Malkin, fittingly, wraps up the scoring to confirm his tournament MVP status.