Review of the season – part 1

September
The start of the season is overshadowed by the tragedy in Yaroslavl, where the aircraft flying Lokomotiv to its opening game in Minsk crashes on take-off from the city’s airport. Forty-four people are killed, including the whole of the club’s senior playing and coaching staff. News of the disaster breaks during the first period of the Opening Cup, being played in Ufa between the previous season’s Gagarin Cup finalists Salavat Yulaev and Atlant Moscow Region.

Shockwaves reverberate around the sporting world – the dead included representatives of almost all the major hockey nations and tributes pour in from all sides. As the start of the season is delayed, each of the KHL’s other 23 clubs offers to transfer players to Yaroslavl to enable Lokomotiv to compete as planned. After pause for reflection, however, the club’s directors opt to regroup at their own pace, focusing first on the MHL youth team, and later contesting half a season in the second-tier senior competition, the VHL.

On the ice the action finally gets away amid understandably somber scenes in arenas from the Amur to the Tatras. Salavat Yulaev claims the season’s first silverware, coming from behind to beat Atlant 5-3 and win the renamed Lokomotiv Cup. 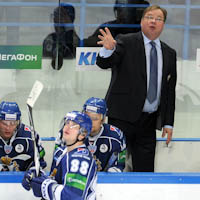 October
In the early stages of the season the league table has an unfamiliar look, with lowly Amur Khabarovsk leading the charge. Under the guidance of wily Finnish coach Hannu Jortika (right), the unheralded Far East team is a revelation. The likes of Czech forwards Jakub Petruzalek and Petr Vrana, backed up by Finnish defenseman Mikko Maenpaa, helped the Tigers earn their stripes early in the campaign. Ultimately Amur would manage only its second ever play-off appearance.

From East to West, the league also saw newcomers Lev Poprad start to make a mark. The Slovak squad made a slow start to the campaign, but claimed some notable scalps as the autumn nights began to draw in. Starting with a 4-1 home win over eventual champions Dynamo Moscow, the club also stunned perennial powerhouse Ak Bars in Kazan, and lost out in an 11-goal thriller against defending champion Salavat Yulaev. While the season would prove frustrating for the Slovaks, there were some real highlights along the way.

Emotional scenes greet the return of hockey to Yaroslavl early in October, with Loko’s youth team taking to the ice in the Volga city. The games attract big crowds in the hockey-mad city, but the pain felt by many is all too clear. Tributes to the lost team can be found all over the town, on almost every billboard and memorial, and 40 days after the plane crash Lokomotiv’s Arena 2000 reopens with a moving memorial service. 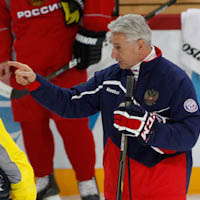 November
The focus switches to international hockey as Team Russia’s new head coach Zinetula Bilyaletdinov (left) names his first squad. A revamped roster sees several of the old guard – the likes of Alexei Morozov, Maxim Afinogenov and others –stand down in favor of a more youthful line-up. The experiment proves sufficient to go to Finland and win the Karjala Cup, stage one of the Eurotour, with the likes of Evgeny Kuznetsov (Traktor), Vladimir Tarasenko (Sibir, later SKA), Evgeny Ketov (Severstal) and Sergei Shirokov (CSKA) all making the best of their chance. However, doubts remain in some quarters, with coach Bill’s side facing criticism for being overly reliant on Salavat Yulaev’s flamboyant forward Alexander Radulov.

Back in the league, more coaches are under fire – and on the same day last season’s finalists decide to ditch their new chiefs. In Ufa, lukewarm form is accompanied by murmurings of locker room discontent as Sergei Mikhalyov was replaced by Vener Safin. Meanwhile in Mytishchi, legendary Swedish coach Bengt-Ake Gustafsson is unable to find the winning formula, with high-profile NHL returnees Alexei Kovalev and Nikolai Zherdev both struggling for form and fitness early in the season. The turmoil in Ufa has unexpected repercussions – Czech forward Jakub Klepis leaves the club for Dynamo Moscow, where he ends the season by scoring the winning goal in the decisive Gagarin Cup game. 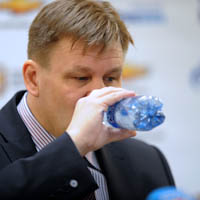 December
Another month, another managerial change, and Avangard Omsk calls up Raimo Summanen (right) for a second stint in the hotseat. The Finn replaces Radislav Cada, who took the job in the off-season in place of … Raimo Summanen. Rumors of locker-room unrest at the end of his previous tenure notwithstanding, Summanen galvanizes his charges for a strong second phase of the campaign and ultimately leads them to within a single game of championship glory.

Elsewhere, Traktor Chelyabinsk highlights the value of coaching stability. The 2011 season ended with the Ural side failing to make the play-offs; by the end of the year, however, Valery Belousov has his team challenging at the top of the Eastern Conference, while much-vaunted rivals such as Ak Bars, Avangard, Salavat and Metallurg Magnitogorsk count the cost of changes behind the bench before or during the season.

Team Russia faces renewed criticism after a poor showing on home ice in the Channel 1 Cup. Bilyaletdinov’s search for a winning formula comes undone with two defeats in three games and a disappointing third place in the four team tournament leaves Russian hockey fans reflecting anxiously as the Kremlin clock chime in the New Year.

Meanwhile in Yaroslavl fans look to 2012 with renewed hope: Lokomotiv’s senior team makes a winning return to the ice in the VHL, and an agreed change to the rules gives the beleaguered club every chance of earning a play-off spot based on a win percentage, despite necessarily playing far fewer regular season games than its rivals. While painful memories of the September tragedy are still raw, the successful resurrection of the team gives hope and encouragement to everyone associated with the game.