This was Russia’s fourth World Championships final in five years. After victories at Quebec 2008 and Berne 2009, Russia had to settle for silver in Cologne in 2010, when they could not break through a solid Czech defense. Before Quebec, Russia’s previous appearance in a final was the 2002 defeat at the hands of today’s opponents. It was the one and only time Slovakia won the hockey World Championship, and this was the Slovaks’ first final in the ten years since that triumph.

Practically all of the pre-game previews, whether from the journalists packed into the Hartwall Arena press box or from the various experts from the hockey world, spoke of the superiority of the Russians - superior not merely by the names on the team sheet, but also by recent form out on the ice. The Russian team stormed through to the final without a single loss, and had beaten several of its opponents by three or four-goal margins. The Slovaks’ journey had been a lot more arduous: after a narrow (5-4) win over France they achieved a stunning upset by beating the Canadians (4-3) in the quarter-final, followed by an equally sensational 3-1 triumph in the semis over their Czech neighbors.

In contrast, back in the 2002 final the Slovaks were the slight favorites. The Russian team, apart from Buffalo’s Maxim Afinogenov and Dmitry Kalinin, plied their trade in the domestic Superleague, while the Slovaks had formidable NHL stars like Zigmund Palffi, Peter Bondra and Miroslav Satan in their ranks.

The current Slovakian line-up boasted two players from that 2002 final, Miroslav Satan and Michal Handzus, whereas Russia had only Dmitry Kalinin, but the Russian coaching staff decided not to risk the veteran defenseman for this decisive game due to question marks over his fitness. The Red Machine’s line-up was therefore unchanged from that of the previous two rounds. As for Slovakia, there was a minor boost with the inclusion of Yugra’s Tomas Starosta, who had recovered in time from the injury he sustained against the Czechs.

The Russians started the final just as they began the semi-final against Finland, by allowing an early goal. Zdeno Chara scored with a shot from the blue line which fizzed into the far top corner; unlike Janne Niskala’s opener for the Finns this one needed no deflection. The goal rattled the favorites, and a palpable tension crept into their play. Evgeny Malkin had a chance to soothe the nerves and pull level when he was presented with an almost empty net, but Spartak Moscow defenseman Ivan Baranka got his stick in the way in the nick of time. 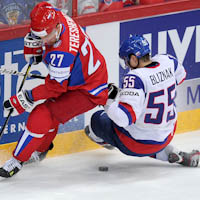 The next decent chance to equalize fell to Alexander Syomin and he made no mistake. For the first time at this World Championship the whole second line combined to score: Pavel Datsyuk’s clever pass set Alexander Ovechkin free out wide in the opposition zone and he centered for Syomin to tap in from close range. Having cancelled out the early setback Russia decided to keep it simple for the remainder of the period, to avoid any reckless errors. After the break, with the exception of the ever-lively Malkin, the Red Machine was strangely muted and struggled to find a cutting edge, so the breakthrough in the seventh minute was as welcome as it was unexpected. Popov’s persistence created chaos in the Slovak defense and the puck fell to Alexander Perezhogin. The forward’s shot struck the post but as Chara and Surovy scrambled back to clear they collided and nudged the puck over their own goal line.

The Russians then adopted the perfect tactic for protecting a precious lead in this tournament: keep it tight in defense and look for a chance to counter-attack. They piled relentless pressure on the Slovaks in their zone, and slowly but surely the opposition began to crack and mistakes began to appear. The result was two near-identical goals in quick succession.

First Starosta, trying to exit his zone, was robbed by Nikolai Zherdev and he found an unmarked Alexei Tereshchenko. The Ak Bars man swiftly swapped passes with Sergei Shirokov and made the score 3-1.

Then Pavel Datsyuk pounced on a mistake, again out wide on the blue line, and he found Alexander Syomin in acres of space in front of goal. To forgive one’s opponents in such a situation would in itself be unforgivable, and Alexander was in no mood to show any mercy.

At the start of the final period the second line scored again. Ovechkin found Syomin lurking behind the goal and his perfectly-timed pass set up Datsyuk, who had crept fox-like into the crease to send a shot between Jan Laco’s pads. Slovakia’s coaches had seen enough, and replaced Laco with number two goalie, Peter Hamerlik.

“It seems we were too tired, and our young players, in my opinion, gave our opponents too much respect,” was how Slovakia coach Vladimír Vujtek summed up the final. “But in any case I want to thank the guys for the hockey they’ve produced in this tournament. It is a long time since we achieved this much success.”

There was a consolation goal for the Slovak fans to cheer, when Chara took full advantage of Ovechkin’s unnecessary penalty, but Russia was to have the last word. Malkin leapt over the boards onto the ice, collected the puck, sailed majestically past a defender and slammed an emphatic shot past Peter Hamerlik. 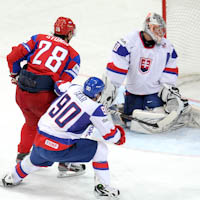 When the final siren sounded, Slovakia captain Zdeno Chara and several other players donned the number 38 jersey in honor of Slovakia forward Pavol Demitra, who perished with the rest of the Lokomotiv Yaroslavl team in September’s tragedy. And on receiving his silver medal, Chara gestured to the heavens.