For the supporters arriving in Helsinki from Stockholm, after the gloomy atmosphere of the Globen Arena, the Finnish capital’s spacious Hartwall Arena seems like a Mecca for hockey fans. Hundreds of people from many nations (even Swedish fans wearing their national team jerseys could be spotted) were already snapping up tickets for this game even before the first semi-final had started, in eager anticipation of seeing the reigning world champions in action. And, unlike in the Swedish capital, the attraction of watching the host nation was strong enough to ensure there was not a single spare seat in the house.

Despite having served all three games of his suspension, there was still no place in the line-up for Dmitry Kalinin. The decision by Russia’s coaching staff was understandable: Zinetula Bilyaletdinov had said after the Norway match that a bout of illness had kept the Ufa defenseman out of training and he was unlikely to be fit enough for a semi-final. So once again Russia named 7 defenders and 13 forwards.

A tentative opening spell, with both teams playing a cat-and-mouse game and taking turns to venture forward, ended with a goal out of nowhere for the Finns. It was an all-KHL affair, as Traktor’s Petri Kontiola passed to Atlant’s Janne Niskala, and his hard but hopeful shot from the blue line took a wicked deflection off Denis Kokarev’s skate and flew into Semyon Varlamov’s net. The Russians seemed a little shaken by the goal and for a while they found it hard to regain any offensive momentum. But Russia still had players of the calibre of Evgeny Malkin. When Nikitin’s shot rebounded to the Pittsburgh man he showed commendable patience, waiting for the right moment before flicking the puck home from a tight angle.

Then the first of four Russian power plays arrived, but some inexplicably complacent play almost let the hosts restore their lead, and only a timely intervention by Nikulin prevented Filppula from pulling the trigger. The chaotic play continued into the last minute of the period until, at the other end, Nikolai Zherdev’s pass found an unmarked Malkin lurking in front of goal. Evgeny’s shot found its way through the pads of Petri Vehanen and Russia was in the lead.

Russia began the second period by almost gifting the Finns an equalizer, thanks to an uncharacteristic lack of understanding in defense, and Russian fans had an even bigger scare a minute later: Malkin went marauding into the Finnish zone with Joonas Jarvinen in close attendance, and the resulting collision between the two sent Malkin crashing into the boards. The two-minute penalty handed to the Finn defenseman was scant consolation. Malkin stayed down a long time and then struggled to make it to the treatment room. 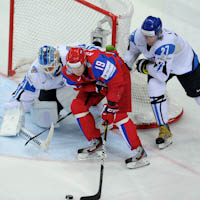 In Malkin’s absence, Bilyaletdinov tried to plug the gap by fielding Ovechkin in two lines, and the Washington forward’s first shift alongside Popov and Perezhogin produced a goal. The trio had been a constant threat, time after time getting past and behind the hosts’ defense, until finally Ovechkin’s sheer persistence took him past two defenders and he carved out a shooting chance. Petri Vehanen must share some of the blame: the Ak Bars goalie went down on his knees a shade too early and Ovechkin gratefully accepted the invitation, shooting high into the net.

Then it was Finland’s turn to get careless with the man advantage, allowing Shirokov and Tereshchenko through on a 2-on-1 break. Shirokov’s alertness had created the chance and he decided to finish it, but Vehanen thwarted the CSKA man with his pads. The next shift saw the return of Malkin, accompanied by a few thousand sighs of relief from the Russian fans. The sighs soon turned to cheers, as Koivu was sent to the bench for slashing and Malkin took full advantage, smashing a powerful shot past Vehanen to make it 4:1. The Russian fans celebrated Evgeny’s hat-trick in true North American style, throwing their hats onto the ice in tribute, and in such number that it took over three minutes to clear the playing surface. One beaming Russian fan displayed a placard bearing the legend, “Bronze play-off: ticket for sale!”

There was soon more cause for joy. Just over a minute into the third period Russia’s fourth line scored its first goal of the tournament. Alexander Svitov’s persistence in a battle with a defender in front of goal paid off when the puck flew into the net off the Finn’s skate. The winner was no longer in doubt.

“We began well, and we could have led 2-0 after the first period,” Finland head coach Jukka Jalonen gave his summary. “But then we allowed two quick goals and lost our confidence. The Russian players were great on their power plays and at taking the chances that fell their way. I don’t think Malkin won it for them. Russia has so many top class players, and they didn’t give us many chances to win. I don’t agree that we made a mistake with our choice of goaltender. Under any circumstances we would have started with Vehanen.”

Russia now concentrated on keeping the lead intact and playing out of defense, but soon a power play led to another goal, this time from Shirokov. As the game entered the final stages Bilyaletdinov sent on Evgeny Kuznetsov in the second line, replacing first Ovechkin and then Syomin. His return after a loss of form was the perfect present for his 20th birthday. There was just enough time left for Russia to concede a careless goal, leaving Mikael Granlund free to deflect Jarvinen‘s shot into the net. After the game Evgeny Malkin was handed the MVP award by KHL President Alexander Medvedev. 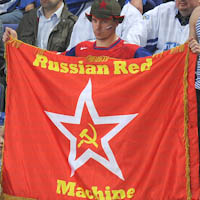 “I haven’t played against the Finns for ages,” said Alexander Syomin. “Not since the World Championships in Quebec. In my view we should have kept up the pressure in the first 5-10 minutes. I didn’t see the foul on Malkin. I think the Finland defender jabbed him in the legs with his stick. You shouldn’t play like that by the boards. After his goal Ovechkin played with a bit less inhibition. The main thing is that we played well in defense, while in offense we have guys who can score.”

“At the start we allowed an ugly goal from a deflection,” Alexander Ovechkin added. “Then we managed to turn the game around, and we played with a lot of discipline in our zone and the neutral zone. When Malkin got injured we weren’t really shaken. They told us straight away he’d return to the ice. The score doesn’t quite reflect the match; it was a very tough game, just as any match for a place in a World Championship final should be.”