Russia’s quarter-final game against Norway fell on the day their opponents celebrate Independence Day, commemorating the signing of the country’s first constitution on May 17, 1814. Norway had been ruled by the Danes for around 400 years, but when their rulers entered the Napoleonic War on the French side, a lengthy British naval blockade of Denmark weakened ties across the Baltic and eventually resulted in a brief few months of self rule, before another war saw Norway incorporated into Sweden for the next 90 years.

From early morning the bars in the vicinity of the stadium were doing a brisk trade thanks to the Norwegian fans, many in national costume, who belted out songs with all their might in honor of their country. And although working on this day is frowned upon, the nation’s hockey team was determined to put in a good day’s labor so they would prove a worthy adversary of Team Russia.


The Russians, of course, were in no mood to make Norway’s national day a happy one. The line-up was as the coaching staff had hinted: there was no place for Evgeny Ketov, third goalie Mikhail Biryukov, and Dmitry Kalinin, who was serving the third of his three-game suspension. In all, Russia named 7 defenders and 13 forwards. As predicted, Alexander Syomin and Alexander Ovechkin, who arrived just two days before, were to form a second line with Pavel Datsyuk, while Evgeny Kuznetsov and Nikolai Kulyomin moved back to the fourth line alongside Alexander Svitov. Denis Kokarev was the thirteenth forward, on paper at least, but in the second period he was sent on to replace Kuznetsov.

“The fact that Kuznetsov went to the bench today does not mean he’ll play no further part,” – said Russia head coach Zinetula Bilyaletdinov.”The situation was he simply didn’t look his usual self.” 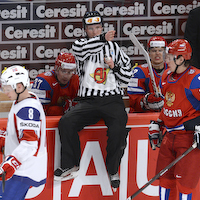 Any fears that Ovechkin and Syomin would have trouble adjusting to the team’s game were swiftly dispelled by the two Alexanders once the game got underway. Ovechkin began with a memorable crunching hit on Mathis Olimb, and Syomin swiftly followed with a dangerous shot at goal. The third line also threatened, with Sergei Shirokov forcing two smart saves from the goalie. But it was Ovechkin who opened the scoring: a pass evaded Syomin and drifted behind the goal, from where Russia’s number 8 took a shot at Lars Haugen and watched in delight as the puck rebounded into the net off the goalie’s skate. It would be harsh to call it a goalkeeping error: Haugen was moving back into position and Ovechkin had chosen the perfect moment to shoot.

The Norwegians had to wait until the 12th minute for their first real goal-scoring chance, but they scored nonetheless. On a 3-on-2 break out of defense Patrick Thoresen’s shot missed the target, but the rebound from the boards was pounced on by Per-Age Skroder before Semyon Varlamov could get across his goal and cover.

The goal spurred the Scandinavians forward in search of a second, but Russia regained the lead with a classic counter. Alexei Yemelin’s long but inch-perfect pass sent Alexander Popov clean through on goal and the Avangard man’s wrist shot was too accurate for Haugen.

Ryasensky was called for slashing just before the break, and Russia started the second period with just over a minute of the penalty left to kill. They held out for just 28 seconds, when Morten Ask’s shot was deftly deflected into the net by SKA’s Patrick Thoresen. Now it was Russia’s turn to surge forward. First Ilya Nikulin’s drive crashed against one post, and then Denis Denisov’s shot struck the other. The forwards, too, had their chances but Lars Haugen was in stubborn mood. The Russians kept their opponents on the back foot for practically the entire period but Norway somehow made it to the interval with the score still level. 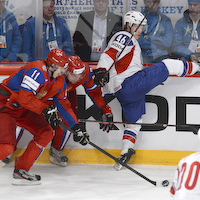 The deadlock was finally broken in the opening minute of the third period. Alexei Yemelin shot from the blue line, Haugen was late to react, and the puck sailed into the top corner. It was a vital breakthrough, and the tension visibly lifted from the shoulders of the Russians.

Now the Norwegians had to throw caution to the wind in search of a third equalizer. Russian hearts skipped a beat when some careless play by Varlamov behind his goal almost allowed Olimb to score, but this was destined to be the last serious threat from the Scandinavians. With confidence restored, the Russians seized the initiative and set about extending their lead.

On 10:43 Biryukov’s shot was tapped in at close range by Nikolai Zherdev. Norway captain Ole-Kristian Tollefsen protested and requested a replay, apparently claiming the Atlant man had scored with his leg, but once again the referee confidently signaled a goal.

“We had some chances after the second period.” – said Norway head coach Roy Johansen. “When we allowed that quick goal, the game went against us. After the controversial fourth goal the game was practically over. I’m not sure whether we have finally broken into the top eight national teams. In our country skiing and biathlon are still the top sports, but by reaching two quarter-finals in a row we have surely increased interest in hockey in Norway.”

With the insurance of a two-goal lead the Russians finally lost their inhibitions, and they looked ever more dangerous on the counter-attack. It was also clear that Haugen’s heroics had left him close to exhaustion, and when defense was under siege during a Russian power play he momentarily strayed out of his goal in search of a clearer view. Ilya Nikulin spotted the gap and showed no mercy, smashing a fierce shot from the center point into the unguarded net.

On Friday afternoon Team Russia will fly from Stockholm to Helsinki to continue the quest for medals.

“Of course we expected the game to be a tricky one,” – said Sergei Shirokov. “The Norwegians are a very good team, and no-one gets into the quarter-finals by accident. We didn’t pay much attention to their rough stuff; we just played our own hockey. It would have been wrong to think we would beat them 10:0. After the second period we made some changes, after which we got into their zone more easily and in the end we were able to win.”

“Norway played with great discipline for two periods, and their goalie performed very well,” – said Semyon Varlamov, in praise of his fellow netminder. “They only opened up in the third period, and then we started scoring. Maybe some tension played a part early on. Compared with the first game, the Norwegians were more assertive this time, and more active around the goal.”

“The guys were excited, of course, and you could see it.” - Zinetula Bilyaletdinov gave his summary. “Their desire was huge, they’d put in some serious training, but in the first period nothing much went right. Ovechkin and Syomin did not look at all bad for their first game. The flying and getting acclimatized all takes its toll, but overall I’m satisfied with them.”