Gazprom Export, the team of Russian hockey legends, continued its tradition of playing an exhibition game on a free day at the World Championships, and at Stockholm’s Globen Arena on Wednesday the opposition was a team of Swedish stars of the past. The host nation certainly took the game seriously and put together an impressive line-up of veterans. The name “Legends” was no exaggeration: the team included 1994 Olympic Champions Tomas Jonsson, Lief Rohlin, Magnus Svensson, Patrik Juhlin, Roger Hansson, Jonas Bergqvist and, of course, Peter Forsberg. Joining them were many former stars of the NHL, including Mattias Norstrom, Thomas Eriksson, Bengt-Ake Gustafsson, Willy Lindstrom and Jonas Hoglund. 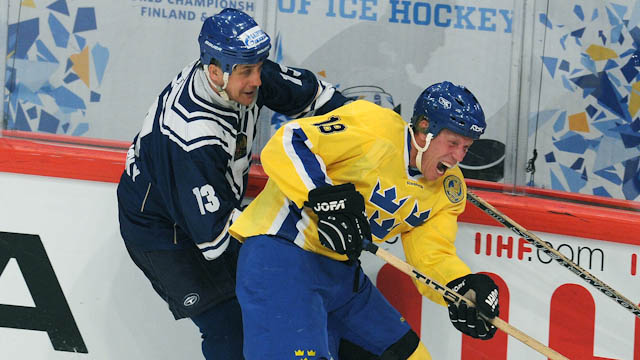 The frequent low attendances at this tournament, even at games involving the national team, had led some observers to fear that the Swedes had suddenly fallen out of love with hockey. This game proved that such fears are without foundation. Even though the tickets were not free, the local hockey fans almost packed the entire lower tier of the stadium. While the teams were being announced the burghers of Stockholm generously applauded each Russian player and greeted the names of their own heroes with an exuberant roar. On hearing the name, “Peter Forsberg,” the whole crowd rose and gave a standing ovation lasting well over a minute.

One man missing from the game was Andrei Kovalenko. The chairman of the KHL Players’ Union was to act as assistant to the head coach, and his place was taken by another former NHL star and Olympic champion, current Vityaz general manager Alexei Zhamnov.

From the very first minute the Russians went on the offensive. While the hosts boasted a star-studded roster and seemed superior in some areas, the Gazprom Export team have trained and played together a lot more, and looked to have the edge in physical strength as well as in teamwork. Many of the Swedish veterans had not taken to the ice for some time, and their rustiness was soon reflected by the score – 4-0 to the visitors after only six minutes. The Swedes had no answer when the Russians’ first line of Kamensky – Zhamnov – Berdichevsky was on the ice and on the rampage. It was this troika which opened the scoring through former Dynamo Moscow man Berdichevsky, and goals from Teplyakov, Chizhmin, and Malakhov swiftly followed.

The Gazprom Export team, perhaps diplomatically, took its foot off the pedal after the initial onslaught, but still produced some fine spells of possession hockey. As the first period drew to a close, the Swedes gained in confidence and Tomas Jonsson majestically outplayed two opponents and pulled a goal back for the hosts.

After the break the Swedes piled on the pressure and created chance after chance. With the defending became ever more frantic the referee spotted an infringement and handed the Swedes a penalty shot. Patrik Juhlin stepped up to take it and confidently beat Maxim Mikhailovsky in the Russian goal.

Stung by the prospect of a dramatic Swedish comeback, the visitors surged forward. A shot by Mikhail Merkulov fizzed into the far top corner of the net and rebounded so quickly that it even escaped the notice of the referee. Gazprom Export captain Alexander Medvedev saw the goal, and he also spotted the video operator standing among the Swedish players on the bench. A quick word was followed by a quick replay, and the referee duly pointed to the center. The goal seemed to ruffle the Swedish veterans, and they allowed another soon after when Kamensky outflanked the entire defense and his wrist shot was too accurate for the goalie – 6-2. In the final period Viktor Gordiyuk extended the lead but the last word went to the hosts, making the final score 7-3 to the legends of Russia. 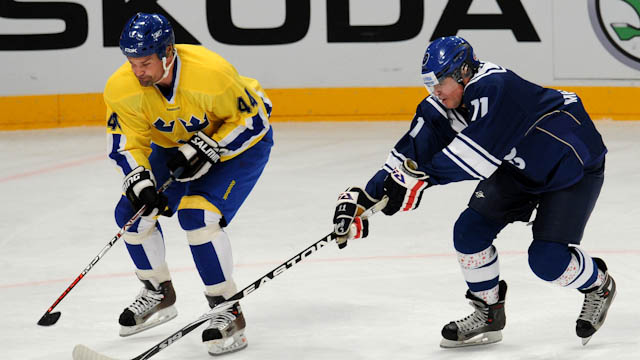