Russian hockey fans could be forgiven for knowing relatively little about Norway: the Scandinavian country has never matched up to its Nordic neighbors Sweden and Finland and is rare visitor to the closing stages of a World Championship.

But there’s no excuse for KHL followers to have missed out on the exploits of Gagarin Cup-winning forward Patrick Thoresen – and every need for Russia’s defense to be on high alert against him.

Thoresen has spent the past three seasons playing in Russia – two years at Salavat Yulaev, culminating in that championship season of 2010-11, and then on to SKA St. Petersburg. In that time he’s plundered almost a point per game, suiting up 206 times to return 78+125=203. As well as that Gagarin Cup medal, he’s also helped Salavat Yulaev to top spot in the regular season table (2010) and SKA to the regular season summit in the Western Conference (2012).

Now the 29-year-old is taking that form into the international arena, and transforming Norway’s polar bears into a fearsome offensive foe. The quarter-final berth was booked with thumping back-to-back wins: 12-4 against Germany and 6-2 against Denmark. Thoresen led from the front, notching 10 points (4+6) in those two games to put him ahead of Russia’s Evgeny Malkin at the top of the tournament scoreboard.

Thoresen himself is modest about those comparisons with the Penguins’ star. “I’m not studying the scoring charts much, but it’s nice to be up there,” he told Norwegian daily title Aftenbladet. “Malkin is a very good player, a goal machine. But our success comes from 20 men standing together. We have incredibly strong spirit in the team. Many of us have been together for years and know each other well. It’s special to play on this team.” 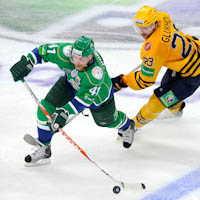 Back in Norway, commentators have pointed to the experience Thoresen has enjoyed in Russia as one of the key factors in the development of the national team, with Anders Blegeberg, sports director of Norway’s Wang Elite Sports academy telling Aftenbladet that the current generation of Norwegian players enjoyed better training facilities and were taking the chance to further refine their skills abroad.

“The coach has got a good mentality in the locker room, and we have players who have played big games before,” he added. “People like Thoresen are accustomed to this level, and understand that [the Russians] are just people as well.”

Russia and Norway have already met in the group stage, and Thoresen bagged an assist despite his team’s 2-4 reverse. But the Scandinavians showed in that game that they were no pushovers: despite expectations of an easy Russian win, it was an open game with Norway keeping on Russia’s coat-tails before running out of steam in the third.

On Thursday Russia’s forwards may face a different goaltender: Lars Vorden’s only game of the competition came against the Red Machine, and Dinamo Minsk’s Lars Haugen is likely to be between the pipes in the QF. It’s another KHL connection, but a limited one. Haugen only managed three games for the Belarusians, all of them against Dynamo Moscow right at the end of last season. In Stockholm, though, he’s posted a solid 91.43% save ratio and one shut-out – and his 160 saves are more than any other goalie still in the competition. Blegeberg regards a strong game from Haugen as key to Norway’s prospects. 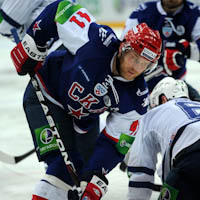 However, despite high hopes in Oslo, few are willing to take issue with the bookies who make Russia huge favorites to progress.

Head coach Roy Johansen told Aftenbladet newspaper that there could only be a shock against Russia’s megastars if Norway played at its absolute peak – and Russia fell short of its potential.

“We have two keys: discipline and hard-work,” he said. “We will meet a team with world stars in every position, but we still have a little bit of hope.”

Meanwhile his assistant Knut Jorgen Stubdal told NTB that the prospect of facing either Russia or Sweden in the last eight was “The plague or cholera!”. He added, though, that he personally felt the team had a better chance against the Russians.