Those who predicted this game would have no bearing on the Group S final standings turned out to be mistaken. While it is true the Russians had secured top place the day before, the Danes’ surprise victory over Latvia had left the Italians languishing in bottom place. For Italy to overtake the Danes and avoid relegation, only an unlikely victory over Russia would do.

Having served his one-game ban, Alexei Yemelin made a welcome return to the side and over the course of the encounter he found himself paired alternately with Nikita Nikitin and Evgeny Ryasensky, and then in the third period with Ilya Nikulin.

Understandably, Russia began at a pedestrian pace, reluctant to become embroiled in too many battles and avoiding any bone-crunching hits. Nonetheless, just before the ten-minute mark the puck was in Italy’s net. Datsyuk did the damage, putting away a pass from Evgeny Kuznetsov, but Italian heads refused to drop and they even created a couple of decent chances to pull level.

There was a change of Russian goalie for the second period, with Semyon Varlamov making way for Mikhail Biryukov, meaning all three of Russia’s netminders would have at least two periods of play under their belts. The first notable piece of action, however, came at the other end. In the fifth minute of the period Nikolai Kulyomin and Evgeny Kuznetsov found themselves 2 on 1, and Kulyomin’s pass gave the Traktor man time and space and he deftly shot into the top corner – 2-0.

It became 3-0 a little over three minutes later, courtesy of Evgeny Biryukov. The defenseman found himself in a central shooting position thanks to good work from Malkin and Perezhogin, and the shot was deflected into the net past an unsighted Thomas Tragust in the Italian goal. At first Popov, who had obscured Tragust’s view, was credited as the scorer, but the replay showed that the deflection came off Popov’s marker, Plastino. 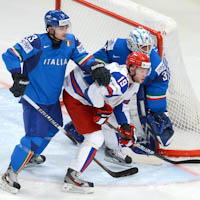 With the points in the bag, the Russians spent the final period conserving their energy. Their offensive lines still posed a danger, however, and threatened the opposition goal on maybe half a dozen occasions, and when the Russians’ defense made occasional lapses they were rescued by some smart saves from Mikhail Biryukov, determined to justify his selection and keep his goal intact.

“It was really tough; I can’t remember the last time I played,” said the goalie. “And it was very hot inside the stadium. I wouldn’t say the Italians were great players technically, but they’re so tenacious. Our mood today was pretty much the same as usual. I think everyone would find it strange if we went out there all gung-ho. As for how much I’ll play in the later stages of the Championship, well, that’s for the coach to decide. I understand that I’m Team Russia’s third goalie. Today they told me to get ready and I went out and played.”

The last word in the game went to Alexander Popov. Some serial sloppy defending by the Italians behind their goal was eventually punished when Perezhogin seized possession and set up his Avangard teammate, who made it 4-0 with a fierce drive from the face-off circle.

And so Russia had consigned the Italians to the first division, and won seven out of seven games with an aggregate score of 27:8.

The identity of Russia’s quarter-final opponents will be confirmed on Wednesday after the Norway vs. Denmark and Czech Republic vs. Germany clashes. The Czechs could still face Russia if they lose to the Germans and the Norwegians beat the Danes, but any other combination of results will match Russia against Norway. 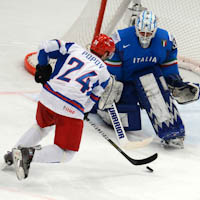 Head coach Zinetula Bilyaletdinov gave his summary of Russia’s performances in the group stage:
“The team has been fairly consistent throughout this first stage of the tournament and achieved a positive result. As for the danger that the new players could upset the balance - yes, the thought has occurred to us, but we just need to work with Ovechkin and Syomin and try to ensure that this doesn’t happen. Yesterday they practiced without the team for a while, since they hadn’t trained for three days. Today I’m satisfied with all the guys and their attitude to the job. Ketov and Kokarev have had to make way for the new arrivals, but these guys have done a great job. I’ll also mention that Kolya Zherdev has not been at his best. He’s a lethal forward, he can win the one-on-one battles, but he’s having a difficult spell. I won’t even think about our possible opponents until after tomorrow’s games – I don’t see the point. Now we need to get some rest. The day after tomorrow we’ll be back in training.”