To secure first place in the group, Russia needed 3 points from the last two games against the Czech Republic and Italy. Even if the Russians finished level on points with the Swedes, they would still claim the top spot thanks to Friday’s stunning victory over the hosts. Winning the group would almost certainly mean a quarter-final against Norway, Germany or Latvia, and any of the three would be preferable to the Czechs. A Russian victory would still mean leave the mathematical possibility of a fourth-place finish for their opponents, but the Czechs are highly unlikely to produce such a serial surrender.

On the morning of the game, news broke that following Washington’s exit from the Stanley Cup the Russians will soon be welcoming the arrival of the Capitals’ Russian duo, Alexander Ovechkin and Alexander Semin.

“I had a talk with both players, and both are fit and ready to come over,” said Russia head coach Zinetula Bilyaletdinov. “There are a few combinations where they can play, but exactly where we’ll know later. We won’t now be calling up Vladimir Tarasenko or Alexander Burmistrov. Tarasenko is still young and has a lot to learn, and right now he’s not fit enough to play straight away. I don’t know why not, but there’s a lesson for him in this. As for getting fit with the national team, that is not our job – the player should keep in shape at his club. We had tried to make allowances for him, but in my view that’s not right. Players called up to the national team should be fit enough to play.”

The day before the game the IIHF’s disciplinary body suspended two of Russia’s defensemen, Dmitry Kalinin and Alexei Yemelin. Kalinin was handed a three-game ban for the challenge on Johan Franzen which left the Swede nursing a broken nose, while Yemelin’s foul on the same player was upgraded from slashing to spearing, and he received a ban of one game - this encounter with the Czechs. So once again, Russia went into a game with only three defensive pairs.

“Kalinin’s punishment was a bit harsh,” said Bilyaletdinov. “The disciplinary committee’s excuse for banning him for three games was that they said Alexei had very aggressive eyes.” 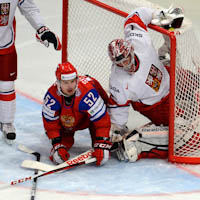 “In our clubs we play with three pairs of defensemen nearly all the time,” said Russia’s captain Ilya Nikulin. “Once in the play-offs, in an Ak Bars vs. Dynamo game, we finished with only three defensemen in total, so there’s nothing difficult for us here with just three pairs. We’ll make adjustments for the absence of the guys suspended, and it even makes things a bit simpler for those forwards who have to help out in defense.”

As if to confirm the captain’s words, Russia opened the scoring after only 24 seconds. Nikulin himself spotted Alexander Perezhogin unmarked behind the goal, and the Avangard guard man emerged to take the pass, turn and shoot into the far corner of the goal. Russia immediately sat back to guard the early lead, but the tactic invited the Czechs forward and they began to create chances. During a tense first period, Russia was rescued a number of times by Konstantin Barulin and once by the crossbar, while at the other end Evgeny Kuznetsov and Evgeny Malkin both spurned chances to extend the lead.

The second period was calmer that the first. Both teams sat back and waited for the opposition to make a mistake, no doubt aware that more crucial games await them in this tournament. Genuine chances were few and far between, and when they did arrive it was the Czechs who threatened to score. Barulin was on form, however, and he reacted superbly to get his pads in the way of two dangerous efforts, first from Salavat Yulaev’s Miroslav Blatak and then from Czech captain Tomas Plekanec.

There was a moment of controversy late in the period when Petr Nedved’s blatant dig with his stick to Alexei Tereshchenko’s groin was witnessed by seemingly everyone except the officials. Thankfully, the Ak Bars forward managed to shrug off the pain and he returned to the ice on his next shift.

“Nedved later apologized for that incident,” said Nikulin. “I don’t know how sincere he was. They had Plekanec trying to provoke our players all the way. He should stick to playing hockey and leading his team, but instead he resorted to making unpleasant and pointless speeches to the referees. I can’t say anything good about his performance today.”

With 80 seconds remaining before the interval, Czech forward Martin Erat was sent to the penalty box for hooking, and in the very last second he was joined by teammate Lukas Krajicek, handing the Russians a two-man advantage for the first 41 seconds of the third period. The Czechs held out until Erat returned to make it 5 on 4, but any optimism was misplaced: seconds later Alexander Popov’s shot was saved by Jakub Kovar, and when the Omsk forward received the rebound he unselfishly set up an unmarked Evgeny Malkin to make it 2-0. The goal gives Russia the best power play percentage of any team in the tournament.

Three minutes later Malkin once again had the puck in the net, but the whistle had gone a fraction of a second earlier. Malkin’s “goal” seemed to irritate Barys Astana’s Jiri Novotny and he petulantly shoved the Pittsburgh man, but bizarrely it was Malkin who received a two-minute penalty.

“You can’t avoid strong challenges” Malkin said after the game. “We have the strength, so we’ll play our own hockey. If they take me out, then Popov or Perezhogin will score. Now we need to concentrate on our next opponents – the Italians, and then on the quarter-finals. We can’t choose who to play in the quarters, but we’ll be ready for anyone.” 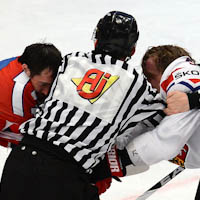 For the rest of the game Russia gave a textbook display of how to hold onto a lead, not giving the Czechs a single sight of goal, and could have increased the winning margin further when Zherdev broke clear with only Jakub Kovar to beat, but the Czech goalie won this particular duel.

The MVP award went to Konstantin Barulin, and he had this to say: “The team helped me out a lot today. Everyone without exception played really tight in defense. Even after dangerous shots there was no way the opposition would be first to the puck.”

With six wins from six games Russia has claimed the number one spot in Group S, so the seventh and final encounter of the group stage against Italy will be a scrimmage in preparation for the knockout rounds.

“I won’t pile pressure on the guys for the Italy game,” said Bilyaletdinov. “But the players have to play well and with discipline, in any case, so that we don’t lose our momentum.”