Team Russia has grabbed the IIHF World Championship headlines with a perfect 5-0 record, but while the Red Machine has cruised into the knock-out stages, the pressure is mounting for the other KHL countries represented in Scandinavia.

With the group phase reaching its final stage, there’s still plenty to play for in the Slovak, Latvian and Kazakh camps, while Belarus retains an outside chance of making the quarter final as well.

But ahead of Sunday’s make-or-break clash with Switzerland in Helsinki, it’s Slovakia which is best placed to progress. The central European nation, represented by Lev Poprad in this season’s KHL and due to see Slovan Bratislava fly its flag in 2012-13, had a tough start with narrow defeats to Canada and hosts Finland, but hit form in game three to down the USA 4-2. Gagarin Cup winner Dominik Granak opened the scoring in that game, and Atlant’s Branko Radivojevic was also on the mark to delight a sizeable Slovak contingent in the Hartwall Arena.

Since then the team has gone undefeated, and Saturday’s 5-1 drubbing of Belarus means Slovakia can all but book a quarter-final spot with a win over Switzerland in Sunday’s early game. That would take the KHL’s newest member one stage further than it managed last year as host nation and bring a solid return for experienced coach Vladimir Vujtek – a familiar face to fans of Russian hockey – in his first season on the Bratislava beat. 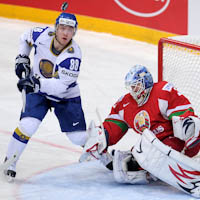 Across the Baltic in Stockholm, Latvia’s hopes of capping a revival with a last-eight berth took a knock on Saturday with a 3-0 defeat against Norway. That leaves the Baltic state in fifth place, one point and one place away from continuing its campaign. However, with two games left against hosts Sweden and struggling Denmark, there is still a chance that a roster drawing heavily on Dinamo Riga’s players could make progress.

And even if the Latvian campaign ends on Tuesday, a tournament which has brought wins over Italy (5-0) and Germany (3-2) is a big improvement on the 2011 showing. Last year Oleg Znarok was forced to drag his team through a relegation round to maintain top flight status: this time Ted Nolan has steered the team to calmer waters, and might have unearthed a star of the future in Miks Indrasis. The 21-year-old has only made one KHL appearance for Dinamo Riga after two prolific seasons in the MHL with feeder club HK Riga, but is the nation’s leading scorer at the Worlds with 3+2=5 points, including the opening goal against Russia in game one.

While Latvia and Slovakia have hopes of further progress, the pressures on Kazakhstan and Belarus are rather different. Kazakhstan, back in the top flight after winning promotion a year ago, faces an immediate return to the second tier after picking up just one point in five games. A crucial 6-3 loss to France at the start of the contest put the Central Asian nation under pressure, and when Vadim Krasnoslobodtsev’s brace was cancelled out in a 3-2 defeat against Belarus the roster was staring relegation in the face. 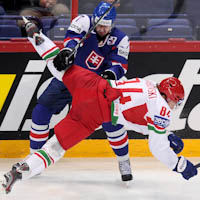 Since then a plucky overtime loss to the USA has restored some belief, but with two remaining games against Canada and Finland the odds are against Kazakhstan finding the points it needs. While the team has seen changes at the top – head coach Andrei Khomutov left his post despite leading the side back to the top level – new leader Andrei Shayanov has continued to draw on the Barys Astana roster he coaches in his “day job”. While that club-and-country continuity made a crucial difference a year ago in Kiev during the promotion-winning campaign, it hasn’t proved quite strong enough to cope with the rigors of top-level competition so far.

As for Belarus, that comeback win over the Kazakhs remains the only success of the tournament. Monday’s clash with France could be a vital one in the relegation if Kazakhstan picks up more points. But even success against Les Bleus is unlikely to see Belarus make a late run for the quarters: the final game sees Canada present a formidable obstacle to any further progress, even if the NHL pairing of Andrei and Sergei Kostitsyn has flown in from Nashville Predators to try to add some much-needed firepower to the roster.