It became clear very early at this World Championship that Russia vs. Sweden would be the crucial game in Group S. Both teams had won four games out of four on the way to this encounter, and in all probability this meeting would determine the leadership of the group and the strength of the opposition in the quarter-finals. The tournament format matches 2nd against 3rd in the quarters, and a glance at the group standings tells us that the loser of this clash would face the daunting prospect of starting the knockout stage against the Czech Republic.

The fans began pouring into the Globe Arena a full two hours before the face-off. Attendances at this tournament had been bitterly disappointing, but a clash between the hosts and Team Russia obviously excited the public, and the organizers once again opened the arena’s upper tier to spectators. A few minutes before the game got underway every seat was taken and at last we had the crowd and atmosphere one would expect at a world championship of a major sport.

The press box was just as packed. This contest between the two leaders attracted journalists from all eight nations in Group S, and they will neither regret nor forget being present. There was something for everyone in this game.

It was obvious from the volume with which the assembled masses sang the Swedish national anthem that they would urge the hosts forward from the very first second. The opening period did indeed turn out to be far from easy for the Russians. The defense struggled to cope with the pace of the Swedish forwards, particularly the first line of Zetterberg - Eriksson – Franzen, and it surprised no-one when the hosts opened the scoring on 5:57. Alexander Popov was penalized for holding the stick and Erik Karlsson inflicted the punishment. With every minute the Swedes’ momentum increased and so did the pressure on Semyon Varlamov’s goal. Not for the first time, Russia looked to Evgeny Malkin for salvation. It almost came when the first line center and Perezhogin found themselves 2 on 1, but instead of passing, the Pittsburgh man went for glory and Viktor Fasth made the save.

A short while later, Malkin attempted an adventurous and seemingly over-optimistic pass to Popov, but the pass found its target and the Avangard man beat the goalie to leveled the match.

The goal should have put some wind in Russia’s sails, but the Swedes kept pressing and forced the Russians back into their zone. When Denis Kokarev was sent to the bench for interference, the pressure became a siege. First Landeskog rattled Varlamov’s post, and then Zetterberg’s deflection restored Sweden’s lead.

Straight after the goal Johan Franzen seemed to provoke Alexei Yemelin, and when the latter reacted with a nudge from the stick, Franzen crumpled to the ice as if pole-axed. The Swede continued to writhe on the ice in the manner made familiar by certain soccer players, perhaps in the hope that the officials would interpret the foul as spearing and hand the Russian a game misconduct. Fortunately for Yemelin, the referee ignored the theatrics and merely called a two-minute penalty for slashing, but for the rest of the period the Swedes dominated the ice and created a number of scoring chances.

The second period began in unexpected fashion - Shirokov was put clean through on goal, but his shot struck the goalie’s pads. The Russians tried desperately to impose their will on the game, and Datsyuk’s and then Tereshchenko’s lines enjoyed decent spells, but the relief was short-lived. First Larsson let Russia off the hook when he should have scored, and then captain Nikulin incurred Russia’s fourth, and weakest, penalty. The Swedish first line showed no mercy: Russia’s skaters and goaltender could only watch in dismay when Zetterberg’s superb pass set up Franzen for an easy finish.

With the deficit doubled the Russians visibly flagged. Basic mistakes crept into their game and it was hard to imagine them finding any route to goal and back into the game. But recover they did, and in spectacular fashion. It is unclear whether or not the Swedes had deliberately set out to provoke Yemelin but they had certainly picked on the wrong man. Alexei is a master in these situations and he began to pay back the Swedes in full, and with interest. 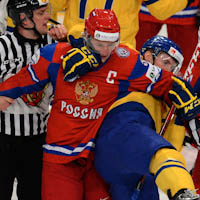 Another clash with Franzen and the Swede reacted, earning a trip to the penalty box and giving Russia a power play. Medvedev passed to Malkin and his shot somehow squeezed between Fasth’s gloves and pads – game on! Yemelin then ruffled the feathers of Landeskog, who duly raised his stick in retaliation and off he went to the sin bin. Just over a minute later, Franzen’s frustration boiled over and when he vented his fury on Malkin it seemed things would turn very ugly. Thankfully, the linesmen intervened to stop a mass brawl, and Ilya Nikulin was handed a two-minute penalty while Franzen received a 2+2 for roughing. The home fans were not happy that Malkin, who had exchanged blows with the Swede, was still on the ice. They were even less happy 19 seconds later, when Russia took full advantage of the 5 on 3 and equalized with a goal from none other than… Alexei Yemelin.

“With Franzen it was just the usual tough battle around the goal,” – he said after the game. “We were fighting for space, neither wanted to give an inch, and I was trying to keep my position. Yes, there’s always a danger of being called for spearing. I admit I lost my cool. We gave away a lot of penalties in the early stages, they capitalized well, and that’s why the first half didn’t go our way. Did we provoke them in reply to their provocation? Yes, you could say that.”

The third period surpassed the wildest dreams of any Russian fan. After just 15 seconds a shot from Medvedev rebounded and Perezhogin smacked the airborne puck into the net. Russia doubled the winning margin in the third minute. A scoring chance seemed to have faded away when Malkin received possession with his back to the target, but his shot somehow crossed the line of the goal. The Swedes were shell-shocked, but the goal brought them out of the trenches and they surged forward, throwing everything at the Russians. There was no way the score could remain the same.

A big moment of danger came when the puck bounced loose around Semyon Varlamov’s post. Franzen, persistent as ever, raced to tap in the loose puck, but his run was spotted by Dmitry Kalinin, whose crunching challenge had the Swede hitting the deck once again. This time, however, there was nothing artificial about the agony: Franzen had a bloody nose, Kalinin had a game penalty, and Russia faced a tense five minutes with only four skaters. 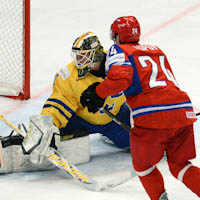 After weathering the short-handed storm, thanks in no small part to Semyon Varlamov, Russia put together a clever counter-attack which ended with Popov and Malkin finding themselves 2 on 1 and Malkin celebrating his hat-trick. Having struck the killer blow, the Russians began to enjoy themselves. Malkin took possession in the neutral zone and set off goalwards, deftly juggling the puck on his stick while surrounded by a circle of nervous Swedes. He almost made it to the goal, and the episode brought generous applause from the partisan home crowd. A short while later Denis Denisov scored Russia’s seventh and the fans were heading for the exits, in silence.

“At some point we lost the thread of the game. At 3-1 we should have scored more,” Par Marts, Sweden’s head coach, said.

“Did your plan to neutralize Malkin fall apart?”
“Yes.”

Team Russia had fought back to claim a brave and highly entertaining victory over the host nation, but the biggest tests still lie ahead. Curiously, the tournament’s other hosts, Finland, cruised to a 2-0 lead against the Canadians, but eventually lost 2-5.

“I was trying to focus on the game and not on the fights, but they will always happen,” said one of Russia’s heroes, Evgeny Malkin. “After this victory the tournament is still far from over, and we have to get better still. The next game is just as important – against the Czechs. When the score became 1-3, we all knew that no way could we keep giving away penalties; we had talked about it in the changing room. We played really well when it was 5 on 5, and I must give credit to Semyon Varlamov.”

Zinetula Bilyaletdinov gave his summary: “The Swedes made great use of their power plays. But we kept on playing, kept our discipline, and we didn’t fall apart and resort to solo efforts. Yemelin’s penalty was unjust; I’ve already spoken to him about it. As for them provoking Malkin, well, Evgeny is used to it. Before the game I told the guys that this would be a real test, one which would show up our weaknesses, and what we need to work on. When the score was 1-3 I still didn’t think it would all end badly. I saw us playing our game, but of course we shouldn’t have given away so many penalties.” 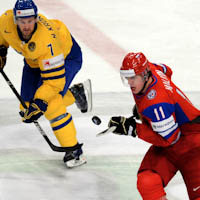