The calm before the storm

The main intrigue in the build-up to this game between Russia and Denmark was not about the result of the forthcoming encounter against one of the group’s outsiders, but about which players are to join Team Russia’s roster to play in the rest of the competition.

On the morning of May the 10th, three new names were added to the Russian squad. The head coach was true to his word and brought in defensemen Evgeny Biryukov and Evgeny Ryasensky, and also a third goaltender - Mikhail Biryukov. The inclusion of the Yugra netminder means that the Philadelphia pair of Sergei Bobrovsky and Ilya Bryzgalov will not be called up, despite their team’s elimination from the Stanley Cup play-offs.

The New Jersey Devils, as Philadelphia’s conquerors, continue their campaign and so Ilya Kovalchuk will miss the World Championships for the first time in 9 years, while Alexander Radulov announced to the Russian media that he will probably need an operation on his wounded knee. Among other possible reinforcements are Alexander Ovechkin and Alexander Syomin of the Washington Capitals and Artyom Anisimov of the New York Rangers. The series between the two teams stands at 3:3 and the decider is on the 12th.

Later in the day came the news that defender Konstantin Korneyev and forward Vadim Shipachyov would no longer feature in Russian plans, while the future participation of Vladimir Tarasenko and Alexander Burmistrov still rests on events in the NHL.

“The problem with Korneyev is that he hasn’t quite reached match fitness,” explained Russia boss Zinetula Bilyaletdinov. “When he joined up with the squad we put him through his paces and there hasn’t been any improvement since then. Konstantin has really tried and his desire is huge, but it was clear he wouldn’t make it in time. He knows himself that he’s not at his best right now. I’ll speak with Radulov later in more detail, and after that - I don’t know. I talked to Bryzgalov yesterday, we understood each other, and reached a decision. It’s not easy for him straight after a NHL season.”

Konstantin Barulin appeared between the pipes for the first time in this tournament, and new arrivals Biryukov and Ryasensky were paired with, respectively, Ilya Nikulin and Nikita Nikitin. Their addition means Russia now has the full complement of four pairs of defensemen.

On with the game, and Russia was already on the scoreboard in the third minute. When Evgeny Medvedev struck at goal from the blue line, Danish goaltender Simon Nielsen’s view was obscured by the forwards and his first clear sight of the puck was when it flew into the top corner of his net. 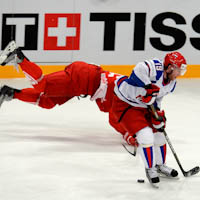 Two minutes later the game took an unexpected turn when the Scandinavians hit back. Lars Eller’s shot seemed to pose little danger but a deflection off Nikulin’s skate was enough to deceive Barulin and level the score.

Russia shrugged off the setback and continued at a moderate tempo, employing frequent change of shifts at regular intervals. Then the Danes almost took a shock lead. Nikitin was late getting to the puck after a face-off and allowed Danish forward Frans Nielsen to get a shot on target, but the puck ended up safely in Barulin’s glove.

Then it was the turn of Denmark’s third line to make a mistake as they tried to break out of their zone, and it was punished ruthlessly. Possession fell to Alexander Perezhogin, his precision pass found Evgeny Malkin, and his shot over the goalie’s shoulder into the net could scarcely have been more accurate if he had placed it with his hand.

Barulin enjoyed a trouble-free second period as Russia’s pressure game trapped the Danes in their own zone for practically the entire twenty minutes, and Sergei Shirokov, Nikolai Zherdev and once again Malkin enjoyed decent opportunities to increase the lead. After Zherdev had spurned yet another chance the voice of one of the Russian coaches rang out from the bench, asking the Atlant man if he was ever going to score.

Russia’s first two goals were good, but the third was a beauty. Evgeny Kuznetsov surged into the zone and set up Dmitry Kalinin, his fellow graduate of the Chelyabinsk school. Russia’s number seven put everything into the shot and the power and accuracy left the goalkeeper with no chance. 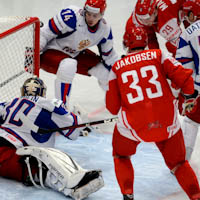 Over the first two periods Russia’s shots tally was 40 to the Danes’16, but in the final 20 minutes the Russians, with tomorrow’s encounter with the Swedes in mind, understandably sat back and waited for chances to counter-attack. Their opponents accepted the invitation to go forward, and this was reflected in the shot count of 20:12 to the Danes, but it was all in vain: Konstantin Barulinwas in no mood to be beaten again.

“At the start I had problems from unpredictable rebounds off the stick, but I exchanged it and then everything was fine,” said Russia’s goaltender. “I think we had a calm game. To be honest, I really don’t know any of the players on the Denmark side, but they are a decent team - quick, and useful on the counter. But it will be a totally different game against the Swedes, with a completely different mood.”

The goaltender’s view was supported by Zinetula Bilyaletdinov: “I regard the Swedes as the strongest team in our group. They have 16 players from the NHL, and they are playing very well. At any other time you’d just sit back and admire them: the players have a good understanding as a team and they’re good individually.”