Team Russia’s coaches paid heed to the old sporting superstition that warns against changing a winning team, so despite having Vladimir Tarasenko, Vadim Shipachyov, Evgeny Biryukov, Alexander Burmistrov and goaltender Mikhail Biryukov in reserve, they went into this game without making any changes to the roster.

All morning the Russian media had buzzed with rumors that Salavat Yulaev forward Alexander Radulov, who moved to Nashville after the premature end to his team’s KHL season, is likely to miss the entire tournament due to a recurrence of a knee injury.

However, Russia head coach Zinetula Bilyaletdinov, speaking after the game, was reluctant to leap to any conclusions: “Sasha will call me after his flight from Nashville to Phoenix. I want to invite him in any case, and everything else depends on his fitness. I have faith in Radulov, and I know what he can do. And I trust his self-discipline. It is fine in our team and after his arrival it is sure to stay that way.”

Curiously, among those in charge were two officials from the KHL: referee Vladimir Balushka of Slovakia and lineman Ivan Dedyulya of Belarus.

Minding the Germans’ net was former Spartak, Lokomotiv and Atlant goaltender Dimitri Kotschnew, who after the end of the KHL season signed a one-year deal with Hamburg, saying he wanted to move closer to his family who live in the city. His selection was probably influenced by the wealth of experience he had gained in the KHL against Russia’s forwards, although Dimitri himself took a different view: “I was picked today just because we are rotating the goaltenders. It’s hard for one goalie to play the entire tournament.”

In fact, the first threat of the game was created by one of Russia’s NHL contingent, Pavel Datsyuk, emerging from behind the goal, but Kotschnew was equal to the danger.

The opening minutes featured some good end-to-end play, with the two teams exchanging chances, but then the game went into a lull for several minutes. Russia was experiencing considerable problems trying to break into the zone past a well-organized German defense. The chances only began to resurface after Nikolai Zherdev’s penalty, but luckily for Russia Semyon Varlamov was in outstanding form and he produced a superb catch to stop a stinging shot by Christoph Schubert.

Toward the end of the period the Russians began to seize the initiative, and the opposition struggled to cope with some dangerous individual forays by Pavel Datsyuk and Evgeny Kuznetsov. When a shot from the latter cannoned off the post the Traktor man began celebrating, convinced he had opened the scoring. Unfortunately for him none of the officials agreed. 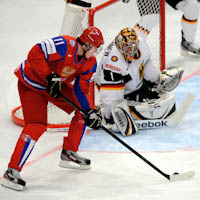 A change of shift with just 20 seconds remaining of the opening period seemed a little optimistic – it would surely be hard to create anything of note in such a short time, but on came the first line and off went the third, with only Zherdev remaining. Then Malkin unexpectedly charged through the defense like a tank through a flimsy barricade and fired off a shot at the target. The puck rebounded off the boards to a grateful Yevgeny Medvedev and his slapshot from the blue line was deftly diverted by Zherdev, sending Kotschnew the wrong way and giving Russia a precious lead going into the break. Malkin, although he did not supply the killer pass, was deservedly credited with an assist - already his fourth of the tournament.

There was a much sharper edge to the play in the second period than in the first. All Russia’s lines bar the fourth were creating chances and both Ketov and Svitov could and maybe should have added to Russia’s tally.

But it was not all one-way traffic. Russia showed a bit of complacency in a power play and would have been punished on a swift counter-attack but for Alexei Yemelin’s last-ditch lunge, which did just enough to prevent Florida Panthers forward Marcel Goc from finishing off the move. Yemelin stayed down after his heroics, while on the bench the coaches sweated about having to cope with just five defenders guarding such a slender lead, but thankfully the Montreal man returned to the ice for the next shift.

Then the emotional temperature increased sharply. A fierce hit by Reul on Kokarev was swiftly followed by two tremendous hits from Alexander Svitov, and then a penalty was handed to John Tripp for, appropriately enough, tripping. While the punishment fitted the name, it hardly fitted the crime - Vladimir Balushka could well have imposed a harsher punishment for use of the knee, although the victim, Dmitry Kalinin, was able to get back on his feet and continue playing.

Germany continued to impress with their neat and tidy play, spurning hopeful long passes from behind their line and instead trying to break into Russia’s zone via passes off the boards. As the second period drew to a close, Perezhogin’s penalty encouraged the Germans forward and forced the match MVP Semyon Varlamov to rescue his team four times against dangerous efforts from long and middle distance.

The third period started as the second had finished, and the danger continued to mount around Varlamov’s net. Russia sorely needed a second goal, and as the game entered its final ten minutes it duly arrived. With 50 seconds left of Russia’s first power play of the period, the third line of Zherdev - Shirokov - Tereshchenko put together a clever move which ended with Shirokov setting up an unmarked Tereshchenko to score from close range. 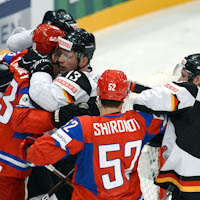 “We knew it would be a tough game against the Germans,” said Sergei Shirokov. “We’ve played against this team in friendly matches and every one of them was tricky. The goal was no fluke – we’d been working on that combination in training, and today it came off. We tried not to let them provoke us. The Germans play is a similar style to that of the Canadians, so we knew what to expect. It was very important to get a win today, on the eve of Victory Day - a very important day for our people.”

For the remainder of the game Russia tried to pile pressure on the opposition in the neutral zone, but with three minutes left a lapse of concentration resulted in Alexei Yemelin receiving a two-minute penalty for holding an opponent. The Russians’ nerves held firm, however, and Kaufmann’s dismissal enabled Russia to see out the closing 30 seconds with an extra man. Then the siren sounded and Russia’s national team could celebrate giving their countrymen back home a small, but very welcome present for Victory Day.

“This was a really tough, tight match with a lot of battling and aggression,” Zinetula Bilyaletdinov gave his summary. “These days a lot of teams play this way, shooting and pressing. I think in some places today our forwards should have done more to help out the defense. Varlamov’s performance deserves a mention – he played really well, and I was happy with the play from Tereshchenko’s line. It was Tereshchenko, Shirokov and Zherdev that created most of the chances. We’ll soon be calling up another defender, maybe Biryukov, although we need to have a proper look at his fitness. But before we decide to call up anyone else, whether it’s an attacker or a defender, we have to wait and see the results from the NHL and then talk to the guys playing over there.”