Team Russia opened its World Championship campaign with a convincing but far from resounding 5-2 victory over Latvia in Stockholm.

One would not have guessed from the pre-game atmosphere that this was the start of a World Championship – mainly due to a disappointingly low attendance. Russia’s fans, who have provided such a large and loyal following at previous tournaments, barely outnumbered their Latvian counterparts, and many put the blame firmly on the ticket prices - €40 and upwards.

“It felt strange playing in front of such a small crowd,” admitted Russian goaltender Semyon Varlamov. “We’ll have to get used to it and just keep playing.”

In fact, the Stockholm public did not even fill the Globen Arena for Sweden’s game against Norway, leaving several thousand empty seats. Those who did attend are unlikely to forget the opening ceremony. Out onto the ice emerged a brigade of men in sporting attire – the same crew which swept away the snow during the commercial breaks – and each held aloft the national flags of Group S countries. Barely had their skates touched the ice when they congregated around the neutral zone face-off spot, placed the tournament mascot in the center and… that was it.

Time, then, to turn to the only thing needed to enliven the atmosphere to the level expected at a world class hockey gathering: the hockey itself.

On the morning of the game Russia’s coaching staff added reinforcements to the roster in the shape of a trio of forwards: Sergei Shirokov, Denis Kokarev and Evgeny Ketov. These additions were fully expected, since the Russians intended to go into this game with the very same combinations they had worked on in training over the last few days.

Fans of the KHL would have predicted Latvia to start with Dinamo Riga’s first line of Martins Karsums - Mikelis Redlihs - Janis Sprukts. Karsums, however, stayed at home nursing an injured knee, and in his place stepped Miks Indrasis, a familiar face only to followers of our lower league, the VHL, where he plays for HC Riga. Indeed, Indrasis has made just the one KHL appearance in his entire career, but he was quick to make his mark in today’s encounter. 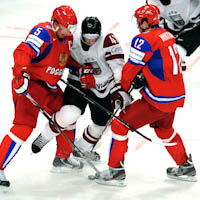 On with the game, and Russia’s performance in the opening period was dispiriting to watch. They began in lively fashion: in a power play a shot from Nikita Nikitin flew past Yugra’s Edgars Masalskis in the Latvian goal and grazed the post. A little later and Evgeny Malkin, taking Shirokov’s place in Pavel Datsyuk’s line in another power play, found Datsyuk with a pass but the goalie was equal to the shot.

But as the teams continued to swap power plays, the Latvians in their turn made better use of the man advantage than did the Russians, and Semyon Varlamov was called upon to work increasingly harder in the Russian goal.

Halfway through the period a superb pass across the blue line found Mikelis Redlihs. His deke deceived Nikitin, but not Varlamov. In the 12th minute, however, Semyon was beaten by a seemingly simple effort from young Indrasis. The goaltender spotted the shot and picked the trajectory, yet the puck somehow squeezed between guards and glove and crossed the Russian goal line.

“When a goaltender produces a foul-up like that, it’s always very hard to keep playing,” Varlamov said, “but it’s a serious tournament and you have to put it out of your mind and play on. With that shot the puck was moving like a butterfly and I just couldn’t get hold of it.”

Stung by the goal, Team Russia fragmented into a collection of stray individuals. The closest they came to a scoring chance was Popov stretching to reach a shot from Malkin, while near the end of the period Mikelis Redlihs could have doubled the Latvians’ lead, but the crossbar came to Russia’ rescue.

It was a different Russia which emerged after the break. Malkin took on the leading role, spreading the opposition with feints and runs and bringing accuracy back into Russia’s passing and shooting. All the offensive lines began hunting hungrily around the goaltender’s crease, so that any shot from distance posed a clear and present danger. And yet Edgars Masalskis continued to catch or parry all that Russia threw at him, and when two more shots came back off the pipes it seemed he could carry on unbeaten all evening.

But Russia’s persistence was about to pay off. After Indrasis was handed two minutes in the penalty box, captain Nikulin’s shot struck the skate of Andris Dzerins, and with Popov partially unsighting Masalskis the puck sailed into the net. A little less than three minutes later yet another power play yielded another goal. Nikulin and Malkin combined to produce a sublime move which ended with Malkin’s shot striking the net past a helpless and stranded Masalskis, who had been lured to the wrong side of the goal.

“Two unnecessary penalties led to us allowing two goals, and was very tough emotionally to get back into the game,” said Latvia defenseman Georgijs Pujacs.

Having edged their way in front, the Russians finally found their game, most noticeably in tightening things up at the back to counter the threat of their opponents’ first line.

Mikelis Redlihs was no longer left unguarded, and on the odd occasion he did manage to gain possession the forward was swiftly shut down. Sergei Shirokov was pulled from a second line which had struggled to make an impact, and his place alongside Kuznetsov and Malkin was taken by Nikolai Kulyomin. After the game Russia’s head coach Zinetula Bilyaletdinov explained that he simply wanted to look at a new combination.

The tight scoreline prevented the coaching staff from launching an all-out attack on the Latvians but a third and fourth goal duly arrived in the 6th and 11th minutes of the third period. First Malkin was in the right place at the right time to fire home a loose puck after a shot from Popov, then Popov himself supplied an accurate finish to a pass from Perezhogin, and the winner was no longer in doubt.

Kaspars Daugavins pulled a goal back for the Latvians, but there was still time for a reply from Evgeny Kuznetsov. Launching a raid into the opposition zone the Traktor man decided on direct action and his ruthless finish found the top corner. 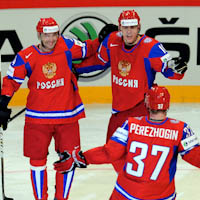 So Russia’s finest, after a wayward first period, managed to turn things around in the second and win by a margin which reflected their superior class.

When asked how his team could have stopped Malkin, Latvia’s head coach Ted Nolan had an eloquent answer: “Over a season there are 29 teams in the NHL that try to stopMalkin every day. But Malkin and Datsyuk are top players in the world. You don’tstop players like that too often.”

After the game Evgeny Malkin gave his summary: “We didn’t really find our game at the start. The tension got to us, and it was pretty hot out there. It’s been a while since I played on a big rink. I think it will be easier from now on. After the first period we had a talk in the changing room, the tension evaporated, then we took the game into their zone and started creating chances. I don’t consider myself our best player today – I scored two practically empty net goals. Well done to all the guys for showing character. If Nashville gets eliminated we’ll be waiting for Radulov. It would be a mistake to overlook such a player. I think it’ll take him some time to adapt to his new team, but everyone knows how good he is and how well he’s performed for Team Russia.”