A dramatic late winner from 11-year-old forward Amir Garayev sealed a 5:4 victory for Ak Bars Kazan over Neftekhimik Nizhnekamsk in a thrilling final of the Gazprom Neft Cup children’s tournament in Omsk on Sunday. The final, played in front of an impressive crowd at HC Avangard’s Arena Omsk and broadcast live on the KHL-TV Channel, proved as entertaining and intriguing as any professional encounter. The Kazan youngsters led this “Tatarstan Derby” 3-0 after the first 15-minute period, but their local rivals bravely clawed their way back to 3-3, and again to 4-4, before Garayev’s cool finish from close-range finally clinched the gold medal for Ak Bars.

“When we were three goals ahead something happened, we began to relax. But then we got together, the coach told us where we were going wrong, we put things right and put our opponents back under pressure at the end,” - said Garayev, who was also named MVP for the winners.

With such a coveted trophy at stake, and such commitment and effort shown to fight back against their rivals, it was hardly surprising that some of the Nizhnekamsk boys had to fight back the tears after the final siren sounded.

“We were a bit stiff at the start and had a bad first period, but then we seized the initiative and scored three goals. We were just unlucky right at the end. All the same, we’re happy to have reached the final,” - said Neftekhimik’s Vladislav Shutov. 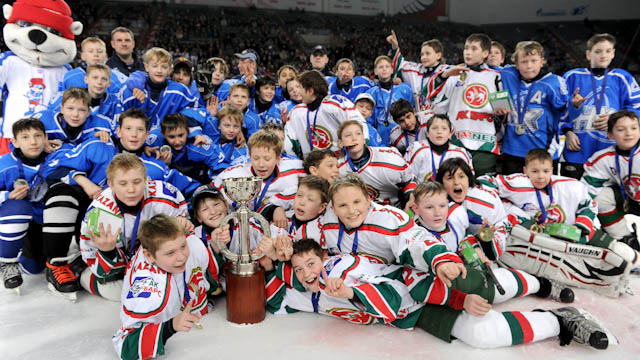 The tournament itself is growing as quickly as its young participants. Now in its sixth year, the number of competing clubs has shot up from just six in 2007 to 16 in 2012, and with Dinamo Riga joining the ranks of this year’s protagonists the event can truly boast international status. In addition to the boys from Latvia, Atlant and Neftekhimik joined the Gazprom Neft Cup for the first time, while Avangard, Gazovik and Yamal kept up their proud record of competing in all six tournaments.

The tournament is now an official Kontinental Hockey League event, and KHL President Alexander Medvedev says there is room for even further growth: “When we look back to 2007, we see that the number of competing clubs has grown from 6 to 16, and now more than 400 players are taking part. For next year’s event we plan to invite all the children’s teams from those KHL clubs located outside Russia, and also from clubs in Sweden and Finland.”

Medvedev’s thoughts were echoed by Gazprom Neft CEO Alexander Dyukov: “We will not rest on our laurels; and together with the Kontinental Hockey League we will make this the best children’s hockey tournament in all Europe.”

Wednesday’s opening ceremony was as impressive as Sunday’s climax. More than 8,000 spectators flocked to the Arena Omsk to watch a game between the two previous winners, Traktor and Avangard, and the symbolic opening face-off was contested by legendary forward Alexei Yashin and KHL President Alexander Medvedev.

Fans and players were treated to a unique multimedia show, which made full use of holographic 3D projection technology free format. Artists from the drummers’ theater “Hammers” gave a performance for the assembled fans, and the coveted trophy, the Gazprom Neft Cup itself, was paraded by Traktor players and Alexei Yashin.

“A tournament like the Gazprom Neft Cup helps these kids gain their first experience of real competition, which is very important. I’m sure that several of these young players will grow into real stars of world hockey,” - said Yashin.

The first Gazprom Neft Cup took place in 2007 in Omsk, was then hosted by Khanty-Mansiysk (2008) and Salekhard (2009) before returning to Omsk in 2010 – the year the event achieved official status under the auspices of the Kontinental Hockey League and took its place on the calendar of KHL events.

In 2011 it was decided that Omsk would be the tournament’s permanent home.

“Gazprom Neft’s joint enterprise with the Kontinental Hockey League, the Gazprom Neft Cup, is a valuable contribution toward the development of not only children’s sport but also the future of Russian hockey. We are very pleased that the home of this tournament is Omsk, as a city which boasts an illustrious place in hockey history and the finest of sporting facilities, and we are ready to raise this tournament to a similarly high standard,” said Leonid Polezhayev, Governor of Omsk Region.