“Shoulder to shoulder in Moscow”

It’s been a while - seven years to be precise - since Moscow played a part in the battle for the top prize in Russian hockey. And since Dynamo won the old Russian Superleague in 2005, the capital’s fans have been desperate for someone to bring the glory days back.

That meant a packed house at the 8,500-capacity Luzhniki Arena, an impressive Soviet-era structure which combines ancient-Greek style colonnades with the trademark imposing functionalism of the era. Each train pulling into the nearby metro station was greeted with urgent whispers about tickets, to be bought or sold at almost any price, queues formed at every entrance and a scrum formed in the foyer with flash-bulbs and clicking shutters evoking the red carpet at the premiere of Hollywood blockbuster ‘The Avengers’, the rival attraction for this Tuesday evening in Moscow.

But even the charms of Scarlett Johansson meant little to the crowds jostling for position to catch a glimpse of the Gagarin Cup itself, the smiling cosmonaut flanked here by two attractive young woman police officers in full dress uniform.

With low attendances for many games involving Moscow’s three KHL teams - and with Krylya Sovietov, the city’s fourth senior club, currently inactive - there has been intermittent speculation about whether the capital has fallen out of love with its hockey. After all, decades of CSKA dominance, followed by an almost seamless handover of power to Dynamo in the early 90s, left local fans glutted with success: in a new era of nationwide pretenders to the crown, it sometimes seems that the ‘house full’ signs are reserved for far-flung towns like Omsk, Magnitogorsk, Khabarovsk.

Yet Dynamo’s march to the final has brought the big-match buzz back to the big city - and beyond. Fans streamed in from Balashikha - their HC MVD flags stood as a proud reminder that the suburban town saw its team merged into the Blue-and-White fold after contesting the 2010 finals. A group of Atlant fans, who had previously come to cheer against SKA in the conference final here, returned to root for the hosts this time. And while Avangard’s home games had seen banners proclaiming support for Omsk from regions as far-flung as Kaliningrad and Kuban, Dynamo even had an exhortation in Czech to encourage Jakub Klepis and Marek Kvapil.

That was merely part of the international interest aroused by the culmination of the KHL season. In the press room a journalist from Finland had flown in specially, ready to feed readers back home with tales of Karri Ramo’s duel against Leo Komarov; of the defensive battles fought by Janne Jalasvaara and Anssi Salmela; of the coaching cunning of Raimo Sumanen. A Czech photographer stood poised, ready for a glimpse of the play-off top scorer Roman Cervenka. The English-language media, from global TV channel Russia Today to local expat newspaper The Moscow Times, squeezed into an overcrowded press box. 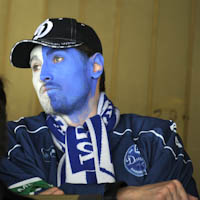 Tapping into the emotion of the occasion, Dynamo’s hardcore supporters produced a giant banner proclaiming themselves “Shoulder to shoulder until the end”. And the club played its part, from the distribution of thundersticks with the slogan “Nobody apart from us”. Even the evening’s incidental music was an aural tour of Moscow in song - and an eye-opening glimpse into Russia’s collective consciousness. One of the hallmarks of a Russian get-together is the huge range of popular ditties known to all, regardless of age or background. From the stirring marches associated with the defense of the city in wartime, to the anthems praising the golden domes and chiming bells of the historic center of Old Moscow, almost every break in play produced another rousingly patriotic rallying cry to inspire players and supporters alike.

In the event, it wasn’t quite enough to deliver victory this time. It was the visiting Avangard fans who remained in a deserted arena, in full and jubilant cry. But, as another cultural icon of the Russian capital proclaims, Moscow doesn’t believe in tears. And tomorrow night another packed house is expected, fully hoping to witness the latest twist in a compelling play-off campaign.