From the 12th to the 14th of April, Saint Petersburg hosted the first ever international forum on “Innovative technology in the field of specialist hockey equipment, modern training methods, functional diagnostics and recuperation processes for athletes.”

One of the items on the forum agenda was the implementation of a joint project initiated by the KHL, St Petersburg’s Gladiator Hockey School, the St Petersburg hockey federation and the Lesgaft National State University of Physical Education, Sport and Health. From all over Russia, coaches and scientists, club owners and the heads of children’s and junior hockey schools accepted the chance to join their counterparts from other nations to discuss the most pressing problems facing the development of modern-day hockey. Experts from North America shared their many years of experience and brought news of the latest innovations. In all, over a hundred people took part in the event.

The forum was opened by KHL Hockey Operations Vice-President Vladimir Shalaev, who welcomed everyone to the event and quoted an extract from Prime Minister Vladimir Putin’s pre-election manifesto: “To build an effective mechanism for the renewal of Russia’s economy, we need to regain our technological leadership, make full use of our impressive legacy of science, master imported technology as swiftly as possible and generate innovation on a large scale.” Vladimir Shalaev then added, “All of this is relevant to hockey. If we do not effectively adopt the latest hockey technology, materials, equipment and techniques, and lay a scientific foundation, then we will stagnate and allow our competitors to overtake us.”

Renowned former USSR and Russia coach Vladimir Yurzinov gave a presentation in which he talked of the importance of permanently striving for perfection in training methods for young hockey players, stressing that, despite the enormous potential of Russian hockey, at this moment in time there is still considerable room for improvement. In order to achieve this improvement it will be necessary to adopt and master the best from around the world. “We do not have the right to be complacent,” said Yurzinov. 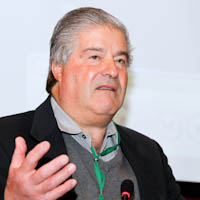 The guests from overseas mentioned Russia’s historic role in world hockey, expressed their admiration for the traditions of Russia’s hockey schools and were not afraid to admit how much they had learned from Russian masters of coaching. Lou Vairo (right), Director of Special Projects for USA Hockey and former coach of the US national team, described the American model of hockey development. He told how in the early 1980s the sport was rated as only the 9th most popular in the US but has now climbed into the top five, while the US national team has become a force to be reckoned with at the world championships and Olympic games. The quantum leap, according to Vairo, came thanks to the import of talent from abroad, including specialists from Russia. Famous coaches like Anatoly Tarasov and Arkady Chernyshev went to the USA several times to share their know-how, as did specialists from other hockey nations. As a result the Americans were able to put together their own unique system. Vairo announced his eagerness to share his secrets of success for the benefit of world hockey, while at the same time re-iterated his support for the individuality of each hockey school, so that the strongest can be determined in competition out on the ice. 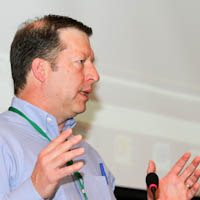 Kevin McLaughlin (left), director of the USA Hockey department for youth programs, stressed that the goal of any system for coaching and training athletes is first and foremost to produce worthy citizens. “Of the huge number of children playing hockey, only a few will progress to playing the sport at the highest level, but for the others this experience will not have been wasted. They will have acquired an athlete’s constitution and will grow up to be strong and healthy.” This mass participation in sport has been achieved in the US thanks to the work currently being done by sixty thousand coaches, or thirty times more than in the 1980s.

Several of the contributions were devoted to athletes’ physical training. Professor Trevor Cottrell gave a talk on various warm-up methods, and Matt Nichol, physical training coach for teams in the NHL, NFL and NBA, described his training techniques. Canada’s Glenn Anderson, six-time Stanley Cup winner and member of the NHL Hall of Fame, provided the participants with an entertaining diversion with stories from his long and illustrious playing career. He then stated his belief that a team which makes shrewd use of the latest technology can gain a crucial advantage over its rivals.

A tremendous amount of interest was generated by the appearance of Laura Stamm, the creator behind the theory and method of the Power Skating System, which is used by many teams in the NHL and some national teams. The system allows a player to encounter strong hits with confidence and also maximizes a hockey player’s pace. Laura explained the benefits and details of her methods and gave a demonstration of some of the basic moves. All of the participants were presented with a copy of her book, “Speed and Power Skating in Hockey” and the author gladly agreed to requests to autograph many copies.

Day 2 of the forum got underway with a training session on ice under the guidance of Laura Stamm. Her former pupil Alexander Malkov, chief instructor at a Canadian skating school, demonstrated some technical maneuvers and introduced several exercises to some young Russian hockey players of various ages from local youth teams.

There then followed a trip to the Gladiator Hockey School for a presentation of new and innovative equipment. The Woodway Blade Skating Treadmill, developed to teach the techniques of ice skating, drew particular attention. Use of this treadmill leads to more effective training sessions, as the coach can supervise the player’s movements and make instant corrections. Sylvain Robbilar, head of five children’s hockey schools in Canada which use the treadmill, gave a demonstration of its potential. He also demonstrated the cognitive training system CogneSens, which was designed to improve the way players read the game, and was developed in a joint enterprise with Manchester United FC. Sylvain saw the potential of using the system in conjunction with the hockey treadmill and has put it into practice at one of his schools. Saint Petersburg becomes one of only two places in the world where this combination is in use, but interest is growing rapidly among clubs in the NHL and KHL.

The participants were also treated to a presentation of a number of special devices for physical training from the Powering Athletics Company, whose products allow seriously injured sportsmen to take part in fitness training without aggravating their injuries. Also on show was equipment made by Zephyr Technology Corporation, which allows monitoring of the cardiovascular and respiratory systems during training. This allows the most efficient use of the body’s resources without any negative effects on the player’s health. The program from Firstbeat Sports enables coaches to determine the upper and lower limits of an athlete’s workload and so helps create the optimum training regime for each individual player, simply by monitoring changes in pulse rate. In addition, the forum guests had a chance to view the Dartfish video analysis software, grinding machines for skates from Blackstone, the latest in board safety systems from Athletica/Sport System Unlimited, syntheticice by Ice Gliders and other products. 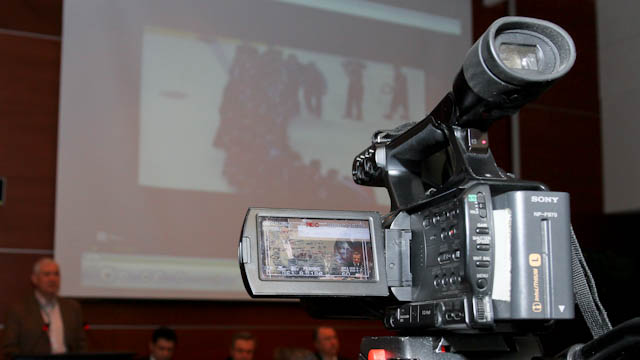 Day 3 of the forum focused on the important topic of rehabilitation and recuperation for injured sportsmen. Dr. David Cuccia showed off his method for treating back injuries and invited the assembled participants to try it out. Doctor Cuccia explained how the system he developed helped Russian boxer Oleg Maskaev return to fitness. Paul Robbins, the author of educational programs for the American College of Sporting Medicine (ACSM) gave a talk on adapting athletes’ cardiovascular systems to the specific demands of modern hockey. Another popular exhibit was a program from the company Dynamic Edge which evaluates an athlete’s functions after the rehabilitation period following concussion.

All three days of the forum featured a visit to the Big Saint Petersburg Prize tournament, contested by teams of young hockey players and won by the team representing Sweden, with Russia finishing in third place. As the forum came to a close all those who attended were presented with a complementary pack of informative literature and a disc with various presentations.

Of all the participants at the forum, the ones who gleaned the most knowledge were the specialists of the KHL Hockey Technology Center. Sergei Sergeyev, the head of the Center, said “this was a new experience for us, and I consider it a positive one. We now have a much better view of where we’re heading and we can continue our work with a doubling of effort. I believe that next year we will be able to bring together an even more representative gathering and increase the interest of the KHL clubs in adopting the latest developments.”