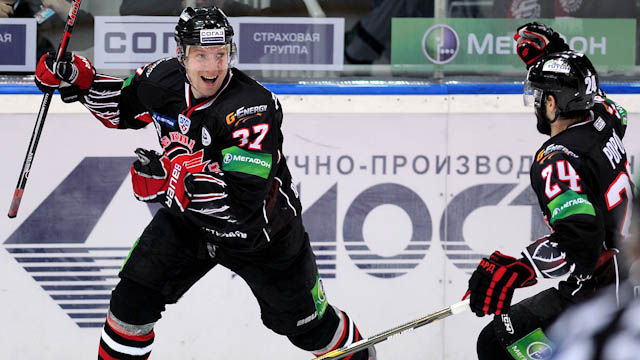 Avangard Omsk claimed victory in the first game of the Gagarin Cup final series – but as expected there was little to choose between the Siberians and Dynamo Moscow. Alexander Perezhogin (pictured) got the winning goal on 43:59, while the play-offs’ top pointscorer Roman Cervenka added another goal and assist to take his tally to 20 in his team’s 2-1 win.

Roared on by a sell-out crowd at Arena Omsk, Avangard launched its Gagarin Cup campaign at a high tempo. Aided by a powerplay after just 26 seconds, the hosts pressed Dynamo back almost from the first face-off, and it was little surprise when Cervenka opened the scoring in the fifth minute. The Czech forward got his 11th goal of the play-offs, beating Alexander Yeryomenko at the near post. Dynamo struggled to get into the game, and even when Avangard found itself short-handed the best opportunities continued to go to the home side. Yegor Averin robbed Janne Jalasvaara on the blue line and bore down on goal, only for Yeryomenko to block his shot.

But Dynamo has shown repeatedly in these play-offs that it has the resilience to hang on in there, no matter how tough things are getting out on the ice. And Oleg Znarok’s front line came up with the goods yet again midway through the second period. Leonid Komarov led a three-on-two breakaway right at the end of a penalty against the Blue-and-Whites, and the Finnish international got the break as his speculative shot from a tight angle bounced off the back of goaltender Karri Ramo to level the scores.

Avangard regained the lead early in the third, with Perezhogin finally turning in the loose puck after Yeryomenko had denied Nikita Pivtsakin from distance and Cervenka from close range. Perezhogin was rewarded for gambling on a run to the far post, while defenseman Jalasvaara was left trailing in his wake. That goal proved decisive: Dynamo’s offense spluttered but never fired into life; the dangerous Mikhail Anisin was – by recent standards – subdued. Meanwhile Avangard played out the closing stages with consummate professionalism, giving the Moscow men few sights of goal and gaining the vital psychological lift of chalking up the first win of the best-of-seven series.

Game 2 is in Omsk on Sunday, starting at 2 pm Moscow time.