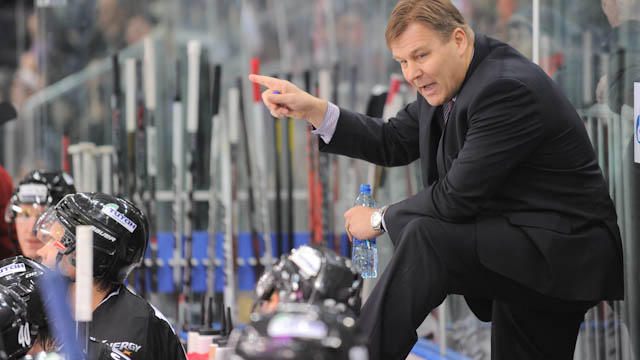 Raimo Summanen has proved that he has the winning touch with Avangard Omsk – as long as that means winning points rather than popularity contests. Despite leading the team to the regular season championship a year ago he was jettisoned during the play-off campaign – immediately prior to a conference semi-final defeat to Metallurg Magnitogorsk – and only returned to the club in December with orders to galvanize an underachieving roster into a winning team. Five months later, and he stands just seven games away from giving the Siberian side its first title since 2004. Victory over Dynamo would also be particularly sweet for forward Alexei Kalyuzhny, who had two seasons in Moscow but left the club following the merger with HC MVD in 2010.

Key men
Netminder Karri Ramo has had his conflicts with head coach Summanen since the Finn replaced Rastislav Cada in mid-season – but nobody could argue with the goalie’s performance in the Conference Final. Two shut-outs in five games, and an incredible 170-minute unbeaten sequence left regular season champion Traktor Chelyabinsk frozen out. Summanen had earlier criticized the former Tampa Bay Lightning stopper for costing the team “six or seven” games in regular season – and summoned him to the bench during a 2-1 defeat to Metallurg Magnitogorsk, but there can be little doubt that the keeper has been on top form in the play-offs.

Credit for Ramo’s impressive stats should be shared with a solid defense: Kirill Lyamin and Anton Belov have “+/-” coefficients of 9 and 8 respectively, with Belov also getting the goal which won game five of the series against Traktor and sent Avangard to the final.

At the other end, left-sided forward Roman Cervenka is currently the top play-off point-scorer, with 10+8=18 from 12 games. The Czech, who settled into the Avangard fold alongside his illustrious compatriot Jaromir Jagr last season, was also the top scorer for the club in regular season play.

The big match
Traktor Chelyabinsk vs Avangard Omsk, Conference final, Game 2
After sweeping Amur 4-0 and breezing past Metallurg Magnitogorsk 4-1, Avangard traveled to Chelyabinsk where host Traktor was full of confidence after winning the regular season championship. With young forward Evgeny Kuznetsov in inspirational form on his return from injury, Traktor won the opening game and held a 2-1 lead at the midway point of the second. Then came the fight-back. Alexander Perezhogin circled the net before shooting home the equalizer seconds into the third period before an epic attritional battle saw the game go into a second period of overtime. The dangerous Kuznetsov was limited to just one shot in 45 minutes of game time as Avangard tightened the screws and came up with a winner in the 86th minute from young defenseman Nikita Pivtsakin.