A new star rising in the East?

In recent years, Russia’s top hockey prizes have tended to head East – all three Gagarin Cups so far have gone to teams in the Eastern Conference and in the 21st century only Dynamo Moscow and Lokomotiv Yaroslavl have broken the hegemony of the likes of Ak Bars Kazan, Salavat Yulaev Ufa, Metallurg Magnitogorsk and Avangard Omsk. But this season the big guns have been outstripped in regular season by Traktor Chelyabinsk – can the team from Tankograd blitz its way through the play-offs?

Is there life after Kuznetsov?
There’s no such thing as a one-man team, but Traktor’s 19-year-old forward Yevgeny Kuznetsov has still been the undoubted star of the KHL season so far. Pace, power and deft stickwork have helped him to 41 points in 49 games this season while a wondergoal back in the autumn made him a worldwide YouTube sensation.

He’s also established himself in Russia’s senior squad and found time to captain the under-20s to a silver medal in Canada in January. Small wonder he was named the player of the season by Russian sports daily Sport Express in a poll of pundits and fans.

But, there’s a catch. An injury sustained last week saw him fly to Germany for further assessment, and the club is sweating on his fitness ahead of the opening play-off game against Yugra Khanty-Mansiysk on Thursday. Without Kuznetsov, Traktor is still a strong team: goaltender Michael Garnett has continued to impress, while Alexander Ryazantsev’s defensive play has seen him drafted into the Russia squad as well. But with Kuznetsov, who will hopefully return by the end of the first round, there’s always that extra outlet, that go-to guy who can change the course of a game. In a section with plenty of heavyweight encounters to come, the youngster’s fitness could be the decisive factor for his team’s prospects. 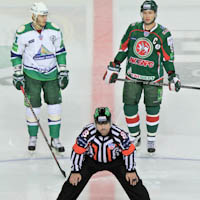 Who will win the clash of the champions?
Only two clubs, Ak Bars and Salavat Yulaev, have lifted the Gagarin Cup – and this season they face-off in the opening round of the play-offs. Both sides were forced to regroup in the summer following the departure of esteemed coaches Zinetula Bilyaletdinov and Vyacheslav Bykov, and both have found it difficult to adapt to a new era.

In Ufa, the defending champion made a stuttering start to the season and in early November Sergei Mikhalyov was dismissed to make way for assistant Vener Safin. His departure came amid talk of locker-room unrest, but followed a dismal run of just three wins in 12 games. Safin steadied the ship and impressed sufficiently to get the job full time, and was rewarded by a return to form for talismanic frontman Alexander Radulov, who scored 63 points. But the damage was done, and a fifth-placed finish means it’s an up-hill struggle throughout the play-offs.

In Kazan, meanwhile, it took time for Vladimir Krikunov to get his charges playing as he would like. Inconsistent all season, this team is still heavily reliant on its old guard – the likes of Alexei Morozov and Danis Zaripov who have fired Ak Bars to previous titles. But the closing stages of the regular season suggested a return to form, with convincing away wins at Traktor and Metallurg Magnitogorsk. This pairing, a repeat of last year’s conference semi-final, is too close to call – but the winner will fancy its chances of going all the way. 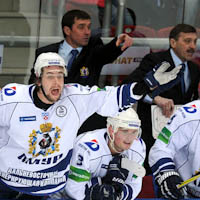 Can Amur make it a debut to remember?
Distant Khabarovsk is better known for great fans than great teams, but under the canny coaching of Hannu Jortikka Amur has finally reached a play-off. It’s only the second time in the club’s history that it is has extended its season, and the Far East side is yet to make progress through the knock-out stages.

So, can Jortikka recreate the blistering form of the fall when his side topped the KHL table? Or will perennial powerhouse Avangard Omsk prove too strong? Much will depend on the likes of Jakub Petruzalek, the Czech forward who blossomed into an international prospect after arriving in Russia, or Finnish defenseman Mikko Maenpaa. Much too might depend on the team’s draining travel schedule – after a winter of long flights, can the players find the energy to extend the battle? The evidence of the latter half of the season suggests a roster which has plenty of talent but is struggling for consistency.

Avangard, meanwhile, finished its campaign strongly despite an apparent bust-up between coach Raimo Summanen and goaltender Karri Ramo after the team’s defeat against Metallurg at the end of January. The pair patched up their differences, and a strong run in February took the Omsk side to second in the Conference. 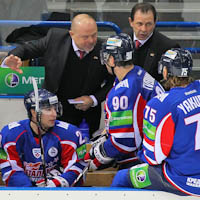 Can Magnitka get back on track?
If the play-offs had started a month ago, Metallurg Magnitogorsk would have been hailed as the form team. From December 5 to February 1, Magnitka won 15 out of 18 games, far better than anyone else in the KHL. But once the players returned from the Eurotour games in Sweden, things have been far from impressive – four defeats from six, including losses to Metallurg Novokuznetsk and Neftekhimik Nizhnekamsk, teams already out of play-off contention.

And that is the Magnitogorsk enigma: a powerful team, with goal scoring options in the form of Juhamatti Aaltonen and the evergreen Sergei Mozyakin, but always capable of a slip-up at an inopportune time. Fyodor Kanareikin, brought in as coach after a rocky spell in early October culminated with a painful 5-1 thrashing at local rival Traktor, has seen some sublime hockey from his charges, but also witnessed some strangely listless displays.

Opponent Barys Astana has already won the two regular season clashes between the pair, and boasts highly rated Brandon Bochenski as the key attacking threat, while experienced goaltender Vitaly Yeremeyev remains difficult to score on. The Kazakhs are the outsiders here, but since October the team has never lost more than three on the spin and could just spark an upset if it can unsettle Magnitka early in the series.