Best in the west?

With the regular season already over, it’s time for the KHL’s top teams to gear up for the play-offs. The action starts in the Western Conference on Wednesday, and that’s where our preview of the big games is due to start as well. 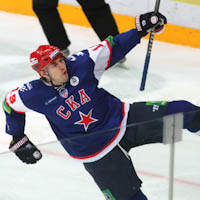 Can SKA deliver at last?
It’s no secret that SKA St. Petersburg has spent big money in pursuit of a first ever title for the club. And fans in the Northern Capital have responded, bringing five-figure crowds to home games in recent seasons as a team with a long history of underachievement (just two Soviet Championship bronze medals since 1946) looks to challenge for top prizes. Yet in past seasons, indifferent coaching or a lack of play-off nous has seen SKA come up short in the play-offs. So what’s new?

Well, head coach Milos Riha might just be the answer. Thanks to his Spartak connections he’s endured a battle to win over sections of the Petersburg support, but on the ice he’s proved once again that he can get the best out of the resources at his disposal. Having taken unfancied Atlant to last year’s grand final, Riha has eased a stellar roster to the top of the Western Conference and a first round series against CSKA Moscow should hold few fears.

With the sad events in Yaroslavl removing one of the strongest Western teams from the equation, it’s hard to see a strong challenger in this section. But memories of previous play-off failures against hard-working, well-drilled opponents such as Dinamo Riga (2010) and Atlant (2011) will haunt SKA until it finally makes a serious push for honors. 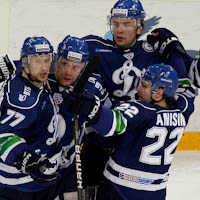 Can Dynamo Moscow get past the first round?
One of the greatest surprises of the 2011 play-offs was Dynamo Moscow’s exit to Dinamo Riga at the first hurdle. With Oleg Znarok’s record of overachievement in crunch games, and with the team topping its division, expectations were high at Luzhniki. But, just as in 2010, the favorites failed to deliver and the dream was over almost before it began. This season Znarok’s team has taken more points in the regular season, but remains resolutely non-starry. If SKA is the glamor side of the Western Conference, Dynamo is the solidly effective outfit, as difficult to love as it is to beat.

As last year, the Moscow team faces a near namesake with Dinamo Minsk lining up in round one. At first glance, the Russians should be clear favorites, but the Belarusian side will take heart from a shoot-out win in Moscow on Friday to wrap up its regular season campaign. Dynamo defenseman Dominik Granak has already warned home fans not to expect an easy ride this week.

Meanwhile, the Minsk outfit finished the season with a poor run – just two wins from seven games in February – but can point to better form earlier in the campaign as grounds for optimism at this stage. And in forward Zbynek Irgl they have an experienced play-off veteran who has already contested Gagarin Cup finals for Lokomotiv and Atlant. He notched 40 points in the regular season, and could be a canny outside bet for top scorer in the play-offs if his team-mates can keep the team in the contest. 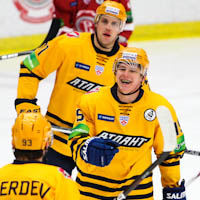 Can the Tarasov division keep producing winners?
On paper, most people would agree that the Bobrov division, with the Moscow teams plus SKA, should be the most competitive section in the west. Yet it’s the Tarasov division which has supplied the recent Gagarin Cup finalists. Will the trend continue this year?

On the face of it, this seems unlikely: the two strongest teams in the Conference, SKA and Dynamo Moscow, both posted 100 points. Nobody from the Tarasov section got close to three figures. And while that section produced a hard-fought four-way battle for top spot, it’s tempting to suggest that this came about due to the mediocrity of the contenders rather than reflecting their inherent qualities.

But there are reasons why these teams could yet spring a surprise come the play-offs, since all of them have produced short spurts of sustained good form. Most notably, Atlant’s 10-game winning streak in November and early December was exactly the sort of sequence that gets teams advancing through play-off series, and it’s that proven ability to turn in a run of good form which makes last year’s runner up the favorite to overcome Severstal in the first round. 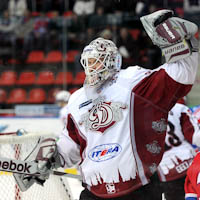 Can Dinamo Riga spring another surprise?
Riga – a lovely city, but not somewhere you’d choose to go and play hockey. At least, that’s how it appears when the play-offs come round. Despite competing on relatively modest resources, Dinamo has already garnered a reputation for upsetting the form book at this time of year.

One year ago it was Dynamo Moscow which crumbled in the play-offs, never recovering from a home defeat in game one and finding the pressure of a packed house in Latvia too much to handle. A year prior to that it was SKA which learned that hard way that nobody should underestimate Dinamo in a head-to-head battle.

This time, it’s Torpedo Nizhny Novgorod, conference runner-up, which is set to run the gauntlet. Can Pekka Rautakallio repeat Julius Supler’s giant-killing feats in this year’s play-off? We’ll start to find out on Wednesday evening.