Igor Shchadilov (pictured) picked the perfect moment to score his first goal of the season for Dynamo Moscow - barely three minutes from the end of Wednesday’s game at his former club Ak Bars Kazan. The well-placed effort from the right-hand circle beat Petri Vehanen and gave the visitors a 3-2 win. Earlier Marek Kvapil had scored twice to give the Moscow side the lead, but Danis Zaripov and Kirill Petrov tied the game at 2-2. 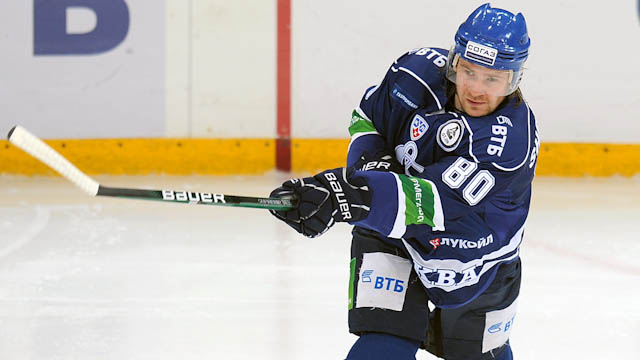 Still in contention
Metallurg Novokuznetsk pulled off another big win in its quest to sneak into the play-offs. A 4-1 success over eighth-placed Yugra Khantsy-Mansiysk keeps Kuznya in contention, six points behind its Siberian rivals. Randy Robitaille and Alexander Bumagin both posted 1+1 in a 4-1 success.

Baranka makes the difference
Spartak Moscow won 4-2 at Vityaz Chekhov to maintain some interest in the race to reach the Western Conference play-offs. The capital club now faces a crunch clash with Dinamo Riga on Friday after two goals from Ivan Baranka proved sufficient to edge a typically feisty encounter in Moscow Region.

SKA too strong
Dinamo itself pushed Western Conference leaders SKA St. Petersburg all the way before going down 2-1 to Viktor Tikhonov’s goal on 50:59. The win keeps the Army Men six points clear of division rivals Dynamo Moscow in the race to top the conference and sees the Petersburg team reach 101 points for the season. The Latvians look fairly secure in seventh place, but defeat at Spartak would ensure an anxious end to the campaign.

Traktor stays on top
Traktor Chelyabinsk held on to the overall KHL leadership with a 5-3 win at CSKA Moscow, with the hosts also now sweating on a Spartak revival. The decisive action came late on: with the game tied at 3-3, Evgeny Kuznetsov and Petri Kontiola struck in the last five minutes to hand Traktor victory. It was Kontiola’s second of the game, and completed a fightback from 1-3 after goals from Denis Parshin and Niklas Persson early in the second period seemed to put CSKA in control.

No way through
Altant and Severstal traded 60 shots on goal - but neither Konstantin Barulin nor Vasily Kosechkin was beaten until the shoot-out. In the sudden-death decider, experience told: NHL veteran Alexei Kovalev and long-serving Kazakhstan skipper Dmitry Upper were on target to give Atlant the win.

Off the bottom
Avtomobilist Yekaterinburg moved off the bottom of the table after taking Lev Poprad to overtime in Slovakia. Denis Abdullin cancelled out Emil Lundberg’s shorthanded opener for the Slovaks, and the game was settled by Abdullin’s two goals in the shoot-out.

Around the league
Oleg Kvasha scored twice - a penalty shot and an empty net goal - as Neftekhimik Nizhnekamsk beat Torpedo Nizhny Novgorod 3-1. The result does little to help a Neftekhimik side already out of play-off contention, but boosts the prospects of Dinamo Minsk beating Torpedo to their divisional title.

Alexander Perezhogin scored twice for Avangard Omsk in a 5-2 win at Barys Astana. The Siberian side maintains the pressure on Salavat Yulaev in the race for second place in the Eastern Conference.

Three goals in a 10-minute spell at the end of the second period proved enough to give Metallurg Magnitogorsk a hard-fought 4-3 win at Sibir Novosibirsk. Sergei Mozyakin, Lasse Kukkonen and Yaroslav Kosov did the damage between 30:37 and 39:48.