History with a smile

These 65 years of Soviet and post-Soviet hockey could inspire one to compose emotional tales and ballads, or to sift through all the events to find those little-known bits of trivia which are nonetheless a pleasure to read. The renowned and award-winning journalists Gennady Larchikov and Sergey Chuyev chose the latter.

Pyotr Vorobyov, the janitor
During the 1997-98 season, at the Russian Olympic Committee building, there was a coaches’ meeting in which all those coaching clubs and national teams appearing in international tournaments that year had to give a progress report. Pyotr Vorobyov, now in charge of rebuilding the Lokomotiv team, was at that time boss of Torpedo Yaroslavl, then competing in the Euroleague, and also coach of the Russian youth team which had finished runner-up in the world championship, and so was required to give an account of both events. But Vorobyov was also an assistant to Vladimir Yurzinov, head coach of the Russia team at the Olympics and the world championships, and Yurzinov was unable to attend the meeting, leaving Vorobyov with the extra task of reporting on those two tournaments. When he once again rose from his seat to give his fourth report, the hall erupted in laughter when one of his fellow coaches exclaimed, “You again, Pyotr? If you enjoy it that much, can you not just report for all of us?”

A few minutes later the meeting came to a close, and as Vorobyov made his way out of the building he realized he had forgotten to make a call, so he asked the security guard if he could use the janitor’s telephone. As a large group of his colleagues filed past and saw him with the phone in his hand, Viktor Tikhonov could not resist asking: “Pyotr, so you’re even doing the janitor’s job as well?”

Instead of joining in the laughter, Vorobyov kept a perfectly straight face as he replied, “Well, what of it, Viktor Vasiliyevich? I have a family to feed!”

Arkady Chernyshov, the taxi driver
Summit series veteran and former Dynamo Moscow defenseman Valery Vasilyev has only fond memories of Dynamo and USSR head coach Arkady Chernyshov, including one episode which to this day still makes him chuckle. But at the time, it was no laughing matter. Even now, the legendary defenseman wears a guilty smile when he tells the story.

“Once, on the day of a game, Alexander Maltsev and I each bought a suit, and we decided we’d have a few drinks to celebrate. After this we were in a rush to get to the base where the team was training. We managed to flag down a car to give us a ride, and there behind the wheel was… Chernyshov. He didn’t lose his temper; he just said in a distraught voice, “How on earth will you play?” We started to reassure him, saying we would do everything possible and impossible for victory. I don’t need to tell you the sort of mood we were in going onto the ice. We gave well over 100%. We won, but I don’t recall the exact score – it was a long time ago. But the crazy amount of effort and commitment we played with that day is something I’ll never forget.” 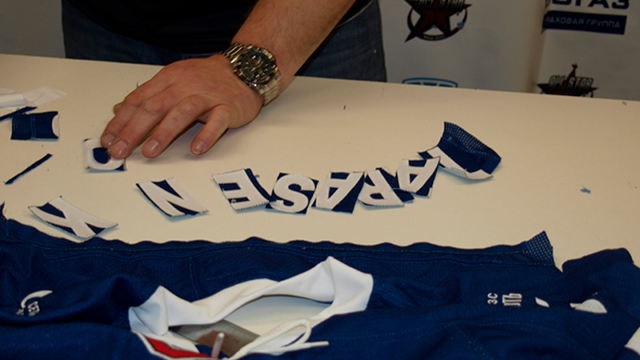 Tarasov’s army maneuver
Four decades ago, CSKA’s hegemony was such that Khimik Voskresensk head coach Nikolai Epshtein quipped, “Let’s give the army guys the gold medals now, so the rest of us can play for second place.”

However, season 1970-71 started in a highly unusual fashion. By the middle of November CSKA trailed Dynamo by 14(!) points (for comparison: the previous season the Army Men lost only 9 points in 44 games). But although unexpected, this was far from inexplicable. During the summer Anatoly Tarasov announced that he would have to write his dissertation, and so he would be unavailable to coach the team for some time. During this spell he left his faithful assistant Boris Kalugin in charge. But before he left (according to many of my veteran Army Men friends - Gennady Larchikov) he warned the leading players, “Don’t even think about winning. I’ll be back in charge of the team, and any winners will be in trouble.” And the obedient vanguard of the team carried out Tarasov’s orders: there followed two losses to Dynamo followed by a heavy defeat at the hands of SKA Leningrad… the Army men then tasted defeat against Khimik and Spartak.

It may be hard to believe now, but Tarasov had a plan. Namely, a run of weak performances by the Army Men would not go unnoticed by the chiefs of staff, who would then demand Tarasov’s return to save the team. And pretty soon he would be wearing trousers with a general’s stripe down the sides. Tarasov did indeed return, and his first game back on the ice was a 6-2 triumph over Dynamo, and after that the season followed the usual script as CSKA once again wrapped up the gold medal well before the season finished. Tarasov’s heroics, however, did not trigger the Defense Ministry into asking if he wanted to change his colonel’s stripes for those of a general.

How Khimik lost games and saved money
Khimik Voskresensk attacker Vladimir Smagin tells of this curious episode. For some reason this team from an industrial town out in Moscow Region went on a losing streak which had stretched to seven straight losses. After the seventh defeat team boss Nikolai Epshtein walked into the changing room and announced:

“The director of the factory has given you all a bonus – an extra 70 rubles each.” Every player without exception was puzzled. How could they get a bonus after such “achievements”?

“If you had won all those games, the factory would have gone under,” Nikolai explained. “You see, they would have had to pay you much more money for winning, so your repeated failures have saved the factory money, and that’s why you’re getting this bonus.”

It was a real blow to the self esteem of the players, and a subtle psychological gambit. Over the following days Khimik snapped its losing run; the team woke up and once again displayed the kind of hockey it was known for. 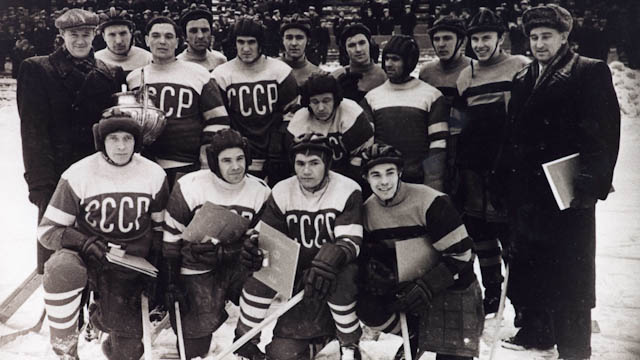 The joke is on Tarasov
Anatoly Tarasov was not, as they say, the most touchy-feely of characters, and many found themselves on the receiving end of his harsh temper. But if the chance ever arose to play a joke on the great man, it was often eagerly accepted. One such story was recounted by world and European champion Alexander Vinogradov.

Tarasov had a brother, Yury, who played for Spartak (he later moved to VVS and he perished with the team in the Sverdlovsk air disaster of January 1950). In those days there was no pre-game get-together for training; the players made their own way to the rink from their homes. Before the Spartak vs. VVS game (Tarasov was playing coach at VVS) the two brothers travelled together from the family home to Dynamo stadium. When they went out on the ice, Tarasov found to his amazement that his skates were trying to move in different directions, making him look about as graceful and steady on the ice as a cow – his brother Yury had taken a file to the blades of his skates. You can imagine the noise… Tarasov missed the start of the game.

“Back in 1955 CSKA, like the other teams, finished the championship playing on a rink with the new artificial ice. CSKA’s reserves used to train at the team base in the Lenin Hills - a deeply unpopular site among the players, who back in the days before the metro had reached the area, faced a difficult journey by bus or tram. The players rested their hopes on the spring sunshine melting the ice, but in vain.”

“Then one day, Mikhail Ryzhov came to the rescue. He brought a bag of salt to the rink and after the training session, when it was dark, he scattered the salt all over the surface. The following morning, when the players arrived at the Lenin Hills, the ice had indeed melted. And so an incandescent Tarasov ranted and raged, but his fury did not extend to the players. “This is the work of that watchman. I’ve long suspected he’s a Dynamo fan. He will be fired!” The CSKA players were in no mood to argue – that was the end of the hated training sessions on the Lenin Hills ice. 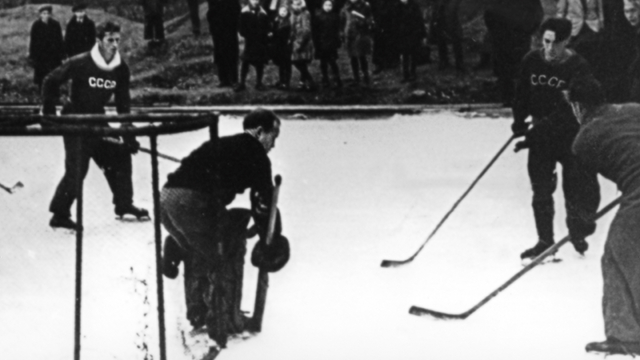 Another psychological victory
Russia’s youngsters began the 2001 world junior championships in Finland by winning their first three games, swiftly clinching top spot in the group and securing their place in the semi-finals. There was therefore nothing at stake in the final game of the group stage against Sweden, turning the encounter into a de facto friendly. Russia lost, and after the hooter sounded head coach Vladimir Plyushchev’s face was like thunder.

“Don’t worry about it,” said I (Sergey Chuyev) in an attempt to soothe the coach’s nerves. “It is rare for any team to go through these tournaments unbeaten, and it’s better to lose now than in the play-offs.”

“And what do you know about hockey?!” – fumed the boss. “How on earth are we going to get a winning mentality from results like this?”

A short while later I approached the Russia team’s changing room. I could see Plyushchev near the door, standing with his back to me, and he was explaining the following to his assistants:

“It’s alright, don’t worry about it…” – and on he went, repeating word for word the very same thoughts I had aired before him only a few minutes earlier.

Tarasov’s law
It was in 1969 that Boris Mikhailov, alongside his partners Vladimir Petrov and Valery Kharlamov in that legendary Soviet attacking troika, first tasted World Championship glory. Soon after the victory he was approached by some of the USSR veterans and told they should repay the faith shown in them by Arkady Chernyshov and Anatoly Tarasov by leaving a bottle of the finest spirits in the coaches’ hotel room.

The trio duly set off to scour Stockholm for the most flash and expensive wine on sale. Having succeeded in their search, one of the players managed to find his way into the hotel room and plant the bottle on the coaches’ table.

“What do you call this?” bellowed Tarasov. One of the players started to mumble an explanation to the boss, mindful of Tarasov’s fearsome reputation when it came to punishing anyone who stepped out of line.

“I realized the veterans had played a joke on us and I expected us to get a real ear-bashing,” – Boris Mikhailov recalled. “But he just gave a wink at the KGB man who’d just walked in. His job was to keep an eye on the behavior of the players and coaches. Tarasov said to him, “Go and get ours,” and the KGB man left and swiftly returned with an unopened bottle of vodka.”

“Well, which one of you is going to pour?”

“That was usually me,” said Mikhailov. “So I had no choice but to take the reins of power in my hands. I filled some small glasses very quickly and with great precision, for which I received a favorable retort from Anatoly Vladimirovich: “How’s that for technique! And what a temperament!”

After I’d poured 100 grams, Tarasov said to us: “Right, young fellas! Remember this, now and forever: if you’re going to drink, then drink only vodka, and none of that foreign muck!”

“We always obeyed this law handed down to us by the great coach,” Boris said. “We could hardly disobey a command from Tarasov himself! And all through our playing days we never touched a drop of spirits, apart from vodka. And that, of course, was only when the situation seriously demanded it.”