Today in Yaroslavl was an historic day for the entire hockey world. Following the tragic air disaster of the 7th of September the rebuilt Lokomotiv team played its first official game. The Yaroslavl men will spend this season playing in Russia’s lower league, the VHL, and their first opponent was last season’s silver medal winner, Neftyanik Almetyevsk.

On this unseasonably mild winter’s day a packed house was expected at the Arena-2000, with all tickets having been snapped up within four hours of their going on sale last Friday. The people of Yaroslavl sorely miss having top-class hockey and their eagerness to support their new team ensured there was hardly a spare seat at the arena.

Before the game a minute’s silence in honor of the departed was observed while the stadium screens showed clips of the previous season and the last recorded training session featuring those sportsmen who are sadly no longer with us.

Right from the opening face-off the fans urged Lokomotiv forward, and their team of youngsters – the eldest of Pyotr Vorobyov’s charges is all of 22 years – had little choice but to attack Stanislav Galimov’s goal. The young Railwaymen could not match the visitors for power, or some places for skill, but made up for it in speed and enthusiasm. 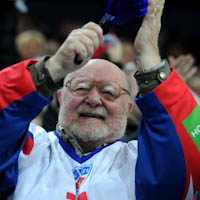 “I just hit and hoped,” – admitted the young forward, but his speculative shot found its target. “It was really hard for us to get into the game after they ran those video clips on the screen, but then it got easier.”

The hosts were very solid in defense, backed up by a highly impressive performance between the pipes from young Nikita Lozhkin, who learned his goaltending trade at Perm.

In the second period the hosts managed to double their advantage thanks to the efforts of one of their more experienced players – Oleg Yashin, who despite being only 21 has already played in all three leagues.

In the final period goals from Kirill Kapustin, a graduate of Yaroslavl’s own hockey school, and then Daniil Yerdakov, back from Sokol Krasnoyarsk, increased the lead to 4:0, before the guests made use of some uncharacteristically slack defending around the Lokomotiv net to grab a consolation goal. But a couple of minutes from the end it was the Railwaymen who had the last word, when Alexei Kruchin restored the four-goal winning margin.

“The Yaroslavl guys deserved the victory,” – said Neftyanik boss Rishat Gimayev after the game. “It’s a young and ambitious team. Unlike us, they didn’t make mistakes in defense.”

“We put in some serious preparation for this game,” – said head coach Pyotr Vorobyov. “We know Neftyanik is one of the VHL’s leading teams. I’m pleased we did our job in defense, and we showed some intelligent play in offense, especially in the third period. I thanked the guys for this emotional victory.”