This city has waited over twenty years for a day like this - since the 21st of September 1989, to be exact, when SKA Leningrad hosted the Washington Capitals. A long time ago indeed…

The fairy tale atmosphere of the evening hung in the air under the dome of the Ice Palace. First for the spectators who had filled the Palace to the rafters, like a tantalizing aperitif, there was a dazzling laser show, the finale of which set the theme of the impending ice spectacular, the highlight of which was, of course, the game itself.

“Games like these are very important, they stand out from the routine games. A packed Ice Palace, an exotic opponent, a friendly game but the kind that’s played like a play-off, yet another chance to test yourself, to show your ability,” was the view of the most experienced player in the SKA ranks, Sergei Gusev.

As the hosts, the Petersburg men rightly set about stopping their guests from getting settled on the ice, and from almost directly behind the goal Konstantin Panov introduced himself to Cam Ward by guiding the puck home via a defenseman’s skate and through the hapless keeper’s legs. The goal served as a wake-up call to Carolina. The North Americans upped the tempo and really set about making Evgeny Nabokov work for his crust, and SKA’s new goalie had what was perhaps his finest game so far for his new club.

“Carolina, like any NHL team, will always battle to the final whistle. For them it is no exhibition game, where you can close your eyes to the result, it’s in the blood, in the religion of this sport, which is the national game on that side of the ocean,” were Evgeny’s words.

A first period in which fouls were few and far between was coming to its close, and the penalty handed to Carolina’s Pitkanen just 20 seconds before the interval did not seem too ominous for the guests, but with six seconds left Maxim Rybin got his stick to Maxim Afinogenov’s shot and SKA’s advantage suddenly doubled.

And what kind of fairy tale would it be without some wild twists in the plot? For the first three and a half minutes of the second period Carolina whipped up a hurricane which overwhelmed the SKA defense and the guests leveled the score. Then a different kind of contest appeared, the kind hinted at in the evening program. Alexei Petrov went to the aid of Maxim Sushinsky, who had been on the receiving end of some pretty rough treatment, and although Petrov’s tussle with Tim Gleason came to nothing, it at least showed that European players can stand up for themselves. 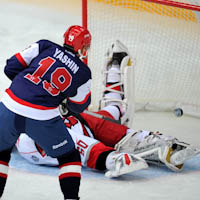 “During the pause some Carolina players went up and started shoving Maxim around. I couldn’t just stand back while they tried stuff like that, so I decided to sort it out. I had no fear, I just needed to show that if they mess with us, then we’ll hit back as we should” Petrov explained.

The first fisticuffs of the game were preceded and triggered by a superb body check from Maxim Rybin on Eric Staal, after which the Hurricanes’ coach decided to pull his captain from the game.

“The chances of getting injured in an exhibition game are very high, - said Darius Kasparaitis, one of the SKA coaching staff. – No-one goes out there thinking they are playing just a friendly. Everyone goes out to win, to battle, and there is no such thing as hockey without injuries.

With Staal gone, on came Paul Maris, and Justin Peters was sent on in place of Ward. The guests’ defense held firm until eventually Alexei Yashin cleverly waited for the goalie to hit the deck before firing into the roof of the net. 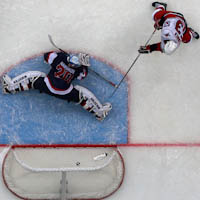 “For me the whole chance was made by Maxim Sushinsky, he should get the credit for intercepting their pass. All I had to do was turn that chance into a goal,” Yashin noted modestly.

Carolina then showed they were far from content to just chase the game, and Jeff Skinner once again taught the SKA defenders that when short-handed, you simply cannot leave an opponent free in front of the net. Ruutu found him with an intricate pass, and Skinner deftly trapped the puck with his skate before tapping it home past Nabokov.

“For us the visit to Petersburg is not some stroll around the tourist sights with a game added on, - said Carolina’s Anton Babchuk. – The game had a festival atmosphere, it’s just that one team is a month into its season and the other has only just started training. I believe we put on a good display of hockey for the spectators. 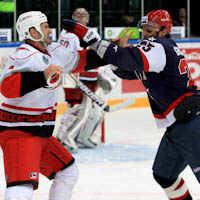 Every fairy tale must have its happy ending. And its hero, of course, with his swashbuckling exploits. This evening the heroics were performed by all of SKA, from the brilliant performance of Nabokov to the young defenders Berdyukov and Golovkov. But there would have been no victory without the classy double struck by team captain Sushinsky, who at the start of the third period once again gave his comrades a precious lead. But the advantage was defended with great effort by the whole team, be it with sticks or with fists. In the dying seconds of the game Igor Golovkov, who had a massive game for SKA, had no hesitation in challenging Jay Harrison to fight man to man.

“Before the game Darius Kasparaitis said I should have a battle with their number 44, that he was the only one for Carolina who would fight. I couldn’t back down in front of all my team. Of course, coming from the lower league to play against a team from the NHL is like a fairy tale. But my legs didn’t shake, and today we played as one. I want to say a sincere thank you to the fans, they supported us so well. Now we have to avoid being judged on this game alone, we have to play all the rest of our games just like we played today,” was Golovkov’s summary.