We now know the identity of the Western Conference finalists. HC MVD, the biggest surprise of the season, needed just five games to win their semi-final against Dinamo Riga, who found themselves unable to reproduce their earlier giant-killing exploits. Having knocked out the top Western team and Gagarin Cup hopefuls SKA St Petersburg in the first round, the Riga men could find no answer to HC MVD's extremely well-organized display. Dinamo tried hard, however, taking the last two games into overtime, but the Moscow Region outfit still emerged victorious after five outings. On Thursday they beat Dinamo on their own ice in Balashikha 3-2 to win the series 4:1. 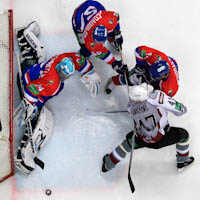 With three hours having passed since the start of Game 5, Alexei Ugarov’s goal finally sealed victory.

“Strangely, I had been thinking about how I would celebrate a winning goal, if I managed to get it,” said Ugarov, “but as soon as I scored it, I lost all memory. I don’t remember where I went after that…”

“Were you not mobbed by your team-mates?”
“As I said, I don’t remember a thing. Only happiness.”

Dinamo recovered from the setback quite quickly, and the journalists were swift to show their support.
“Even though you have just been defeated, it has still been a successful season,” they suggested to Riga defenseman Olegs Sorokins, “indeed you went further than the first round of the play-offs, which was beyond anyone’s expectations.”
“We can accept defeat, but losing by four games to one is hard to take. Now people will think we were outplayed, but that’s far from the truth. These matches were between two very equal teams.”

“You also had a lot of injuries.”
“That is unavoidable, not long after the regular championship, but we battled all the same.”

HC MVD coach Oleg Znarok was asked whom he would prefer to face in the final, Spartak or Lokomotiv?
“I still haven’t got over tonight’s match.”

“And you also have a few injuries?”
“Yes, Pavel Trakhanov took a knock in the first period, and it looks like Pavel Vorobyev will miss the rest of the season. Yury Dobryshkin is back in training, although he’s only just out of plaster, and Alexei Kudashov also has his skates back on, so that’s promising.”

HC MVD’s players also refused to express a preferred opponent for the conference final. “It makes no difference to us,” insisted Evgeny Fedorov. “We gave good performances against both of them during the regular season.”

Ugarov was also making no guesses, instead preferring to talk about the club’s ambitions. “We’ve played terrific hockey up until now, and it would be stupid to slow down. We want to be winners.”

And HC MVD president, Mikhail Tyurkin, made no secret of their mission. “First we talked about needing to make the play-offs, then the task was to get past the first round, and now our aim is to lift the Gagarin Cup.” 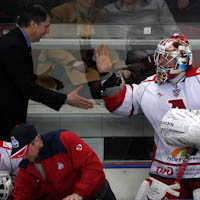 Two days later HC MVD found out who will stand between them and a place in the big final. After four delicately balanced encounters Lokomotiv hammered Spartak at their home in Sokolniki 8-1 to win the series 4:2 and clinch the second spot in the Western final.

Yaroslavl’s railway men booked their ticket to Balashikha to meet HC MVD in the KHL Western conference final, after winning in convincing style and knocking the last remaining Moscow club out of the tournament.

With a little over five minutes remaining of Game 6, and the score standing at 1:7, the home supporters had already started chanting, “Thank you for the season.”

Spartak star Branko Radivojevic, who was disqualified from this game for the brawl, stood near the bench with an expression that would have been no worse if he had personally been at fault for all of Lokomotiv’s eight goals.

“Would it have been any different if I had played?” he reasoned with a journalist. “I don’t think so. We’ll be honest here; things did not happen for me in these play-offs - I didn’t produce the play that I’m capable of.”

“Why, do you think this game turned out to be such a hammering?”
“Almost every shot by Lokomotiv hit the target. We couldn’t break them down at the very start, and then for some reason we fell apart.”

“Which match in the series was the decisive one?”
“I think the fourth game, which we lost. If we had taken a series lead to Yaroslavl things would have been much easier.”

His fellow Spartak forward, Kirill Knyazev, also believes their defeat in the fourth game was fatal.
“Yes, that defeat was devastating. In fact, we beat ourselves. But of course the Yaroslavl guys were always the favorites.”

“Why?”
“Because they have more experience in the play-offs, and it showed.”

To a suggestion that Lokomotiv’s larger budget was a factor, Kirill seemed genuinely surprised.
“What does the budget have to do with it? Budgets don’t play in play-offs. The fact is, we didn’t do enough, and we lost to the classier side.”

Not all the guys from Yaroslavl were perfectly fresh. Alexander Galimov, who escaped a ban despite brawling in the previous game with Radivojevic, was trying to put the episode behind him.

“I wouldn’t have sent us off. Yes, we had a fight, but the aggression was just from the emotions you get towards the end, when no one wants to give an inch. And I can only speak well of Spartak, and the great way they played.”

Lokomotiv head coach Petr Vorobyev agreed.
“Our opponents deserve nothing but praise. They were persistent and determined, and gave our defense a very hard time. But we stood up to the pressure and earned our victory.”

He did not give too much significance to the huge winning margin.
“Yes, we scored a lot of goals, but that’s just the way the game turned. We started by soaking up pressure and then taking our chances when they came. And after the fourth went in it got easier.