CSKA lifts Opening Cup after a thriller at SKA

Don’t be fooled by the calendar: August might not be a month commonly associated with top-level hockey competitions, but there was nothing missing from CSKA’s Opening Cup win over SKA. The two teams picked up where they left off in last season’s thrilling play-off duel, producing high-quality hockey from start to end as the eighth KHL season got off to a rousing start.

As in the play-off series, the score finished 4-3. This time, though, it was a nip-and-tuck affair settled by CSKA newboy Geoff Platt in the first seconds of overtime. Platt, a recent capture from Lokomotiv, opened his account for the Muscovites with an unassisted effort on 60:25, putting away the rebound from his own shot to give the Opening Cup to CSKA.

But once again, both teams played a full part in a pulsating encounter that sets the tone for one of the big rivalries of the coming season. Three times CSKA led in regulation; three times SKA hit back. There was little to choose between these two heavyweights, and were it not from a fine save late on from Stanislav Galimov the points might have stayed in Petersburg.

The first period was played at a high tempo, even if it didn’t produce a goal. The lack of scoring did not mean any lack of interest, from watching the first steps of Evgeny Ketov as he stepped up to replace Artemy Panarin on a line with Evgeny Dadonov and Vadim Shipachyov to the new-look CSKA front line of Roman Lyubimov and Geoff Platt alongside Alexander Radulov. 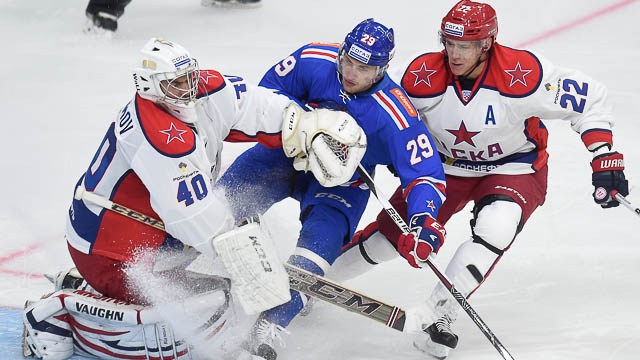 Radulov had the best chance of the first period, drawing a fine save from Mikko Koskinen but last season’s top scorer was not to be denied for long. Early in the second stanza he posted the first marker of Season 8, getting on the end of Igor Ozhiganov’s immaculate diagonal and beating Koskinen close in.

That lead didn’t last long: less than two minutes passed before Joakim Lindstrom marked his SKA debut with a goal, capitalizing on a CSKA lapse on defense to fire in from the face-off spot. Later in the middle session the teams traded goals once again, this time on the power play. First Nikita Zaitsev punished a big rebound from Koskinen to put CSKA up once more, but SKA hit back with a goal familiar from last season’s championship campaign. On the power play Vadim Shipachyov worked some space on the right and fired the puck across to the far post where Maxim Chudinov was waiting to step into Panarin’s old role and shoot past Galimov to make it 2-2 at the second intermission.

There was no separating these two in the third either. Ozhiganov put CSKA back in front when he led a three-on-two break and saw his shot loop into the net off the luckless Anton Zubarev to make it 3-2. But even if the new-look SKA is lacking some of the star names of old, it still has Ilya Kovalchuk. The club captain tied the scores on a power play midway and came close to a late winner when he forced a superb sprawling save from Galimov in the dying seconds. But not even Kovi could stop Platt from snatching the overtime winner.