5 August 2015, 18:00 News
The big signing at Salavat Yulaev this summer came as a complete surprise – experienced trainer Igor Zakharkin is back in Ufa with the unusual job title of ‘coach coordinator’.

Zakharkin has a long and successful history in Russian hockey, but this is the first major role he has taken on without Vyacheslav Bykov. Previously the pair worked together at CSKA, Salavat Yulaev, SKA and the Russian national team. With Bykov as head coach they masterminded two World Championship triumphs and two Gagarin Cups, including one with Salavat Yulaev in 2011.

But Bykov quit SKA after April’s championship triumph and is not expected to return to the game for some time due to family matters. That has prompted his long-term sidekick to find a position on his own … and paved the way for Zakharkin to return to Ufa. At present he is with his new club in Nizhny Novgorod at a pre-season tournament and next week is expected to bring official confirmation of his role.

However, the updated management structure at Salavat Yulaev does not make it entirely clear how all this will work. The club’s official statement envisages an over-arching job for Zakharkin, giving him input into every team within the organization. That is due to include SHL and MHL hockey as well as the Agidel women’s team (this year Russia’s women’s hockey league will come under the aegis of the KHL for the first time). That would seem to put the coach on the same management level as GM Leonid Vaisfeld and incoming general director Alexander Semak and requires that trio to divide its workload accordingly.

Meanwhile new head coach Anatoly Yemelin, who arrives from Avtomobilist with Vaisfeld, already has a well-established staff if his own; Zakharkin is unlikely to be expected to do a lot of hands-on work with Salavat Yulaev’s KHL team. Yemelin will have a heavily revamped roster for the coming campaign as Salavat Yulaev looks to return to its accustomed position among the big hitters of the east. The coach has steadily built up his reputation, moving from Metallurg Novokuznetsk to Avtomobilist and winning plaudits for getting the most out of limited resources. Salavat Yulaev represents his first time behind the bench at one of the league’s bigger club. 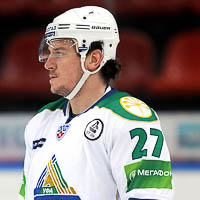 He will be working with two big arrivals from CSKA: Igor Grigorenko (right) is back in Ufa and looking to repeat his prolific form of last season, where he scored 45 points in 55 games. Grigorenko was part of the Gagarin Cup-winning roster here and can expect a warm welcome from the fans. He’s joined by young Nikolai Prokhorkin, a flamboyantly talented forward who seemed to lose his way last season after his break-out year in 2013-14. Playing under Dmitry Kvartalnov did not seem to suit the youngster, who even found himself dispatched to play for farm club Buran Voronezh at one stage of the season. A change of environment could be the key to unlocking his undoubted potential.

Two other big signings have Finnish connections. Linus Omark arrives from Helsinki where the Swedish forward was a key player in Jokerit’s debut KHL campaign. As part of a potent line with Steve Moses and Petr Koukal he scored 46 points in 60 regular season games. Finnish defenseman Sami Lepisto, an Olympic bronze medalist in 2014, follows coach Yemelin from Avtomobilist. Lepisto was something of an NHL journeyman before moving to Lokomotiv in 2012 and he has yet to find a club in Russia that feels like a good fit for a player with a wealth of top-level international experience.

The goaltending positions will be occupied by Sweden’s Niklas Svedberg, who arrives from Boston Bruins where he played 18 NHL games last season. He is joined by Rafael Khakimov, previously of Metallurg Novokuznetsk. After last season’s disappointing sixth place in the east – and a first-round play-off exit at the hands of Metallurg Magnitogorsk – Salavat Yulaev will expect better this time. The roster has the potential to deliver, but it’s a big test for Yemelin as he faces a steep hike in expectations compared with his previous jobs in Novokuznetsk and Yekaterinburg.
#preview