Best of the Regular Season 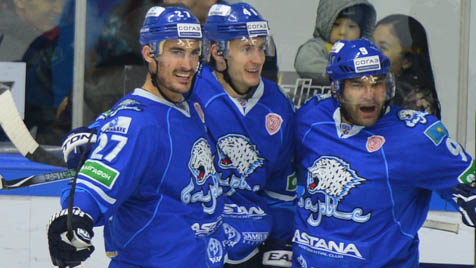 Only a very brave or reckless man would confidently predict the outcome of the Gagarin Cup play-offs. We do, however, know the identity of some of the winners who will be rewarded at the 2014-15 Season Closing Ceremony, as some of the award categories only relate to performances over the regular championship. The following players can therefore start making plans to hire their tuxedo and chauffeur for a balmy Moscow evening in May:

The Best Troika award, for the highest-scoring line in the regular championship, will go to the formidable North American trio at Barys - Brandon Bochenski, Dustin Boyd and Nigel Dawes – who recorded a combined haul of 62 goals.

Kirill Koltsov of Salavat Yulaev will be the proud owner of the Highest Scoring Defenseman prize, thanks to his 48 points (18+30) in the regular season.

The overall Top Scorer is CSKA’s Alexander Radulov, with 71 points (24+47). Alexander will also receive the Best Plus-Minus award, having ended the regular championship on +37.