All Set for Quarter-Finals

The first stage of the KHL Championship, the regular season, has come to an end and the final standings have determined the pairings for the first round of the 2014/2015 Gagarin Cup play-offs – the conference quarter-finals: 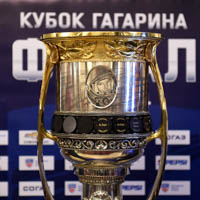 Each round of the knockout stage will consist of a best-of-seven series, with the winner being the first team to record four victories. The teams are seeded by their final positions in the conference standings and the seedings are shown in brackets. Games 1, 2, 5 and 7 are to be played at the home of the team with the higher seeding.